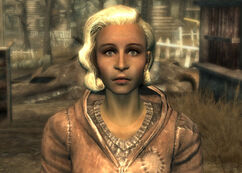 300 Pieces of Silver is an unmarked quest in Fallout 3.

If the Lone Wanderer tells Moriarty that they don't have 100 caps to buy information on their father, he will give them a cap-earning task. He wants the Lone Wanderer to find a woman by the name of Silver and get his money back from her. She is located northwest of Megaton at Springvale, inside a ranch house.

The Lone Wanderer can go about this situation in one of six ways:

The quest's name is a reference to the biblical Judas Iscariot, who according to the Gospel of Matthew, was paid 30 pieces of silver to identify Jesus to Roman soldiers.

Retrieved from "https://fallout.fandom.com/wiki/300_Pieces_of_Silver?oldid=3177849"
Community content is available under CC-BY-SA unless otherwise noted.