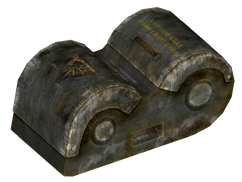 25mm grenade is a type of ammunition in Fallout: New Vegas.

This is standard ammunition for the grenade machinegun. All varieties explode on impact except the timed, which explodes about five seconds after launch, bouncing off things it hits earlier. They deal 50 damage in a radius of 8.59 yards (7.85 meters).

A sub-type added with the add-on Gun Runners' Arsenal. They deal significantly more blast damage than normal 25mm grenades, but have a smaller blast radius.

A sub-type added with the add-on Gun Runners' Arsenal. They deal significantly less damage than normal 25mm grenades and have a much smaller blast radius, but deal an extra 75 damage to robots and 30 damage to power armor.

A sub-type added with the add-on Gun Runners' Arsenal. This type of grenade has a fixed-length 5-second fuse, and will not detonate if it hits something before this, which means it can be used to bounce grenades around corners.