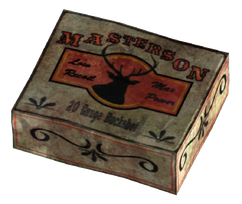 20 gauge shotgun shell is a type of ammunition in Fallout: New Vegas.

"Gauge" is used to describe the bore size of a shot-firing weapon, where high gauge means a small bore size, and lower gauge means a larger bore size. Although bore sizes range incrementally from 1.5 up to 32 (with an aberrant 67.5 topping the scale), 10, 12, and 20 gauge (aside from the .410 shotgun that measures in caliber) are the most common bore sizes, with 12 gauge leading the group in popularity. A 20 gauge shotgun has a bore size of 15.6mm (.62", or 62 caliber), where the gauge number is the number of lead balls of that gun's bore diameter that would weigh a pound, hence why gauge is inversely proportional to bore size.

The "sizes of shot" refers to the individual lead or steel pellets that are fired from the weapon, which vary as well. A typical 20 gauge shotgun shell loaded with #3 buckshot contains eighteen to twenty pellets. Each pellet is 6.35 mm in diameter (0.25" or 25 caliber) and weighs 1.52 grams. In Fallout New Vegas, however, shotguns tend to fire only seven pellets per shot.

Magnum shells are standard buckshot shells fitted with a higher internal powder load, increasing velocity and stopping power. The downside is that they cause more damage to the firearm used due to the higher overall pressure, requiring more regular maintenance.

Slugs contain a large lead projectile promoting better accuracy and kinetic energy over a distance. Slugs enable a shotgun to engage targets at a further distance.

A sub-type added with the new add-on Gun Runners' Arsenal, these loads sacrifice quantity for quality, in other words, there are fewer projectiles overall but they're heavier and pack a bigger punch.

A sub-type added with the new add-on Gun Runners' Arsenal, these magnum shells use the larger 3/0 shot size, but with a greater powder load resulting in higher velocity. The Hand Loader perk is required to craft it.

A sub-type added with the new add-on Gun Runners' Arsenal, these slugs cause more damage to power armor and robots, and the target gets an extra kick from an electromagnetic pulse triggered by the impact.

3/0 buck rounds only have a x1 damage multiplier yet standard 20 gauge shells have a x1.2 multiplier and magnum shells have x1.3, including the 3/0 magnum shells (these multipliers were added as part of patch 1.5 as an incentive to use them over slug rounds). As a result, 3/0 buck actually inflicts less damage than standard shells while inflicting more damage per projectile as the damage is divided evenly among them.