A baseball bat with an oak body and the special effect of having a small chance to send targets flying. Like the baseball bat, it is a slow swinging weapon, swung in a classic baseball swing and a downward swing over the shoulder.

The 2076 World Series baseball bat inside its showcase in the Jamaica Plain Town Hall basement. 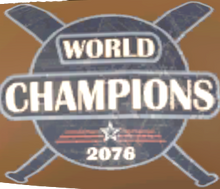