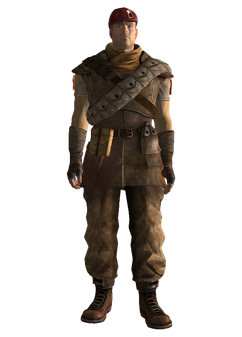 The 1st Recon survival armor is a piece of armor in Fallout: New Vegas.

The 1st Recon survival armor provides a Damage Threshold of 15 and can be repaired with NCR trooper armor. The armor is exclusive to Boone and will not count against his carrying capacity. The armor itself resembles NCR Trooper armor that has the sleeves cut off, worn with a bandolier and Merc grunt outfit style cargo pants and boots.

Awarded to Boone after completion of the quest I Forgot to Remember to Forget, should the player make Boone repentant over his past.