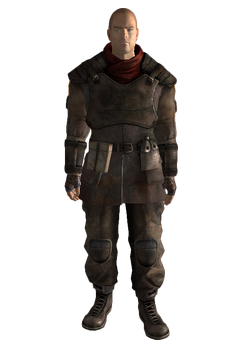 The 1st Recon assault armor is a piece of armor in Fallout: New Vegas.

The 1st Recon assault armor provides a Damage Threshold of 15 and can be repaired with NCR armor. The armor is exclusive to Boone and will not count against his carrying capacity. This armor is a darker version of the standard NCR trooper armor with a First Recon patch on the sleeve, no NCR emblem on the breastplate, and pants similar to the merc grunt outfit or wasteland doctor fatigues.

Obtained after completing his side quest I Forgot to Remember to Forget, if Boone becomes vengeful over his past.