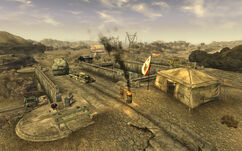 The 188 trading post is a location in the Mojave Wasteland. It is a small outpost made up of makeshift shacks and tents. The trading post is located on the intersection of Highway 93 and Highway 95, directly north of El Dorado dry lake, west-northwest of Boulder City and south of Camp Golf.

The interchange of Highway 95 and Highway 93 has seen high traffic both before and after the Great War, especially after the New California Republic moved into the Mojave around 2274. However, a trading post wasn't established here until September of 2281, when a pair of traders from Primm set up shop here after the NCRCF prison break forced them to flee the city and the wave of escaped convicts.[1][2] Samuel Kerr and his daughter, Michelle, chose this location after realizing just how much traffic was going to flow up Highway 95 to Vegas now that the I-15 was shut down, adding to the usual troop movements between Hoover Dam and Camp McCarran. Capitalizing on their experience in Primm, they established the 188 Slop 'n Shop, offering food, water, supplies and repair services to travelers.[3][4]

Through 2281, the 188 trading post became a hub of commerce frequented by soldiers, merchants, and NCR citizens either heading to New Vegas with pockets full of caps or returning back home with nothing but the shirts on their backs. Even the Gun Runners took notice and set up shop at the post to coordinate caravans in the field, with an independent arms merchant selling wares out of the back of her truck. It's not known which of the Kerrs came up with the clever name (adding the highway numbers 95 and 93 to equal 188) but the name caught on well.[5][6]

Campfires, vehicles, and shacks on an overpass can be seen in this location. There is an arms merchant at the left end of the overpass, and Veronica, a recruitable companion, resides near the center of the overpass by the picnic table. Facing Veronica is the merchant Samuel Kerr and his daughter Michelle who run a small shop cooperatively. Samuel is the bartender and does repairs on customers' equipment.

Above the overpass to the north, there is a small NCR garrison with a tent. A few beds can be found here and can be used by the Courier. There are also a few NCR troops wandering around the tent. Later on, at high levels, some of these NCR troopers will be replaced with NCR heavy troopers equipped with various high-level weaponry such as heavy incinerators. Underneath the overpass is Alexander, a member of the Gun Runners, his bodyguard, and a young boy who sits by the wall.

The trading post may be attacked by Legionary assassins searching for the Courier when they are in the proximity of the location.

Retrieved from "https://fallout.fandom.com/wiki/188_trading_post?oldid=3155138"
Community content is available under CC-BY-SA unless otherwise noted.