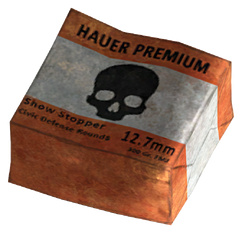 12.7mm rounds are a rare type of ammunition manufactured by Hauer Premium in Fallout: New Vegas.

The Hauer Premium Show Stopper 12.7mm civic defense round is a large pistol round. In essence, these rounds consist of a big flat bullet in a straight case, with a rebated rim.[Non-canon 1][Non-canon 2]

While they have an identical bullet diameter to the .50 caliber rifle round, the much smaller case means it holds less powder and can be safely used in man-portable auto-loading weapons.

Standard and JHP 12.7mm rounds can be crafted at a reloading bench. A single cartridge requires the following ingredients:

Breaking down a standard 12.7mm round yields:

Hollow point bullets mushroom and break up on impact, causing massive trauma on fleshy, unarmored targets. However, this also means they break up when they hit things like armor plate, drastically reducing the weapon's penetrating power.

The Junk Rounds perk from the Dead Money add-on was at one point intended to create ammunition of a special subtype. Called "Junk" or "JNK", these rounds all provided the same modifiers regardless of caliber: 0.75x to Damage and 1.5x to Gun Condition. The rounds remain present in game code but are not placed in any locations, and if somehow obtained cannot be used in any weapons, even those chambered for the correct caliber.

The presence of 12.7mm JNK rounds indicates that the perk was to provide a recipe for crafting 12.7mm rounds, though the final version of the perk does not include one. This may be similar to 12.7mm ammunition's initial absence from most merchant inventories and the lack of a crafting recipe for the ammunition.

A new type of ammunition added with the add-on Gun Runners' Arsenal, JHP, or jacketed hollow point, use a metal-clad bullet that retains most of the damage bonus of ordinary hollow point rounds, but with a less severe armor penalty. 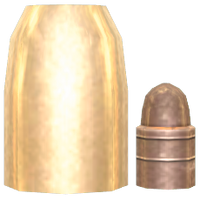