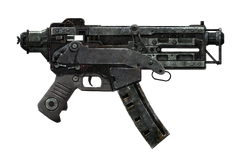 The 10mm submachine gun (SMG) is a small gun in Fallout 3.

The 10mm SMG is most effective at close-range by unleashing a hail of bullets. However, the SMG is next to useless at longer ranges unless assisted by the perk Concentrated Fire. The SMG simply has too much spread to be of much use beyond close-range combat. Another downfall of the SMG is its ammunition consumption; if ammunition is not properly managed, the SMG can eat through 10mm rounds at alarming speeds. With full automatic fire and a 30-round magazine, the SMG is a decent emergency sidearm against most wildlife and unarmored humans, particularly given that 10mm ammo is one of the most plentiful in the game. The SMG is also quite common, making it easy to repair and is recommended to lower level Small Guns users.

The 10mm SMG can fire a total of about 1190 times, the equivalent of 40 reloads, from full condition before breaking. 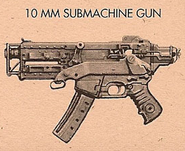 The Lone Wanderer kills a super mutant with a 10mm SMG.

Concept art by Adam Adamowicz
Add an image to this gallery
Retrieved from "https://fallout.fandom.com/wiki/10mm_submachine_gun_(Fallout_3)?oldid=3142308"
Community content is available under CC-BY-SA unless otherwise noted.