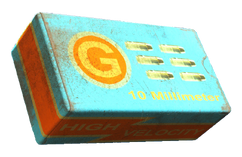 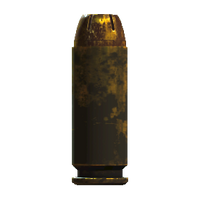 10mm Auto (simply 10mm round in-game) is a type of ammunition for use in pistols in Fallout 4.

The 10mm round is one of the most common types of pistol ammunition found in the Commonwealth along with the .38 round. It is the first ammunition encountered by the Sole Survivor while finding the 10mm pistol in Vault 111.

Commonly used by raiders, Gunners and Triggermen, the 10mm ammo's persistence is explained by its bulk manufacture by Circle G before the Great War, which is linked with the large-scale manufacture of 10mm pistols.

Generally owned by members of the army, private armies and for self-defense purposes in the pre-War era, 10mm ammo deals moderate damage and has a very low armor piercing potential.