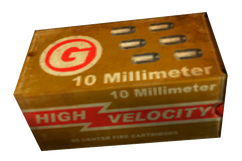 The 10mm round is a type of ammunition in Fallout 3.

Before the War, the powerful 10mm Automatic round was the standard ammunition for the Bureau of Alcohol, Drugs, Tobacco, Firearms and Lasers and other law enforcement agencies, while the military was more reliant on experimental energy weapons (although it remained the round of choice for conventional pistols and submachine guns).[1] The Circle G brand of ammunition was one of the most popular, offering excellent centerfire cartridges for a variety of applications.

It is the most common type of ammunition in the Capital Wasteland, with the second most common being the .32 caliber round. The weapons that use such ammunition are also common, and there are many different types of guns with different statistics that use them, making this ammunition very useful. Made by G, it comes in ammunition boxes of 12 rounds.