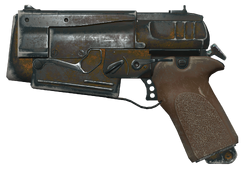 “Small, dependable, reasonably powerful and widely available, the 10mm Pistol has been a staple of Wasteland combat since the bombs first fell.”— VDSG Catalogue No.9709

The 10mm pistol is a weapon in Fallout 4.

The 10mm pistol is one of the first weapons found inside Vault 111 (after the security baton), located in the overseer's office. The pistol itself does reasonable damage and is great as an early tier weapon. It also allows for a reasonable amount of modifications that further emphasizes its versatility. However, despite being provided with a substantial amount of ammunition in Vault 111, ammunition in the early portions of the game afterward is rare.

Loading screen slide
Add an image to this gallery
Retrieved from "https://fallout.fandom.com/wiki/10mm_pistol_(Fallout_4)?oldid=3354755"
Community content is available under CC-BY-SA unless otherwise noted.