This section is transcluded from 10mm pistol. To change it, please edit the transcluded page.

The large-framed N99 was selected as the standard issue conventional sidearm of the United States military, following the phaseout of the N80 in 2051.[1] The long-barreled pistol remained in service for 26 years, until the Great War destroyed the United States. The pistol is designed to withstand the most extreme conditions, which was one of the requirements for a new service sidearm. It can also be repaired easily by anyone with even the most basic technical knowledge. This includes both clearing misfeeds[2] and restoring a unit to working condition after long exposure to elements without maintenance.[1]

These features also make it popular with wastelanders, who appreciate the ease of maintenance.[1] It remains a common weapon, as even though many civilian units were ruined, they can easily be restored by anyone with some repair knowledge.[1] Even damaged units can be used reliably, though they will offer subpar performance and jam frequently. The number of manufactured pistols means that parts are easy to come by, however.[1] The N99 10mm pistol may be equipped with a suppressor for more covert applications.

Though it is easily obtained, the pistol is prone to breaking after a short period of use, so carefully-aimed shots are important. Its iron-sights are also slightly misaligned, with the front post being aligned slightly to the left of the center. However, it does benefit from being considered an improved holdout weapon, and can be concealed and taken into weapon-free locations with a Sneak skill of 50 or greater.

The 10mm pistol can fire a total of about 395 standard rounds, the equivalent of 33 magazines, or 25 reloads when modded with extended magazines, from full condition before breaking.

10mm pistol with the silencer modification

10mm pistol with all modifications 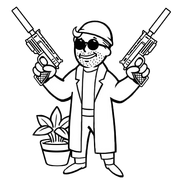 10mm pistols in the perk image for The Professional 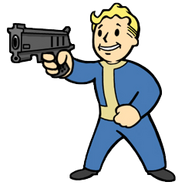 10mm pistol in the achievement image for New Kid