10mm pistols are sidearms using the 10mm ammunition that was common before the Great War. They were used extensively by the Bureau of Alcohol, Drugs, Tobacco, Firearms and Lasers, while in the military such pistols were being phased out in favor of energy weapons.[1] Their ruggedness, reliability and firepower made them a popular choice among wastelanders and thus a staple of wasteland firefights.[2]

The Colt 6520 10mm autoloading pistol is a highly durable and efficient weapon developed by Colt Firearms prior to the Great War.[3] It proved to be resistant to the extreme conditions of the wasteland and is a fine example of workmanship and quality construction. Its simple design allows it to be easily manufactured with relatively basic equipment, making reproduction possible in workshops across the post-nuclear world. The Colt 6520's reliability and accessibility makes it very popular among wasteland denizens, for who sophisticated, high-maintenance weapons would be a liability to survival.[4]

Gameplay article: none (mentioned in Fallout 3)

The large-framed N99 was selected as the standard issue conventional sidearm of the United States military, following the phaseout of the N80 in 2051.[5] The long-barreled pistol remained in service for 26 years, until the Great War destroyed the United States. The pistol is designed to withstand the most extreme conditions, which was one of the requirements for a new service sidearm. It can also be repaired easily by anyone with even the most basic technical knowledge. This includes both clearing misfeeds[6] and restoring a unit to working condition after long exposure to elements without maintenance.[5]

These features also make it popular with wastelanders, who appreciate the ease of maintenance. It remains a common weapon, as even though many civilian units were ruined, they can easily be restored by anyone with some repair knowledge. Even damaged units can be used reliably, though they will offer subpar performance and jam frequently. The number of manufactured pistols means that parts are easy to come by, however.[5] The N99 10mm pistol may be equipped with a suppressor for more covert applications.

The 10mm combat pistol is a semi-automatic sidearm created before the Great War.[7] While it is a different design from the N99, it can be transformed into something similar.[8] One of the key differences is a slide release lever, automatically locking the slide back when the weapon runs dry.[9]

Available to both government and civilian clients, the combat pistol could be fitted with an automatic receiver, turning it into a machine pistol, as well as a variety of optics (including high-tech recon scopes), suppressors and other accessories to improve its performance.[10] At the same time, it remained a reliable, easily modified and powerful sidearm, especially in the wasteland.[11] 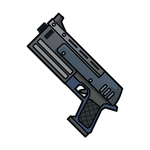