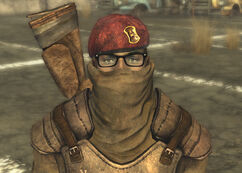 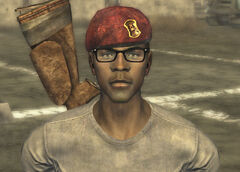 “If I keep at it, eventually I'll make it to Ace. Think I'll skip Queen though.”

"10 of Spades" is the youngest member of the NCR's 1st Recon Alpha Team, living at Camp McCarran in 2281.

The young, stuttering 10 of Spades was born on a farm in the core territories, which meant that he trained with a rifle since he was a young boy (his father said he started when he was just 3 years old).[1] He was good enough at shooting to land a prestigious spot on the Alpha Team around 2280, tremendously improving his shooting in just a year.[2] He originally wanted to be called Ace of Spades, but Lieutenant Gorobets said no... At least not until he got a few confirmed kills. 10 expects to be promoted to jack in short order, though he's going to skip queen for obvious reasons.[3]

10 of Spades is partnered with Corporal Betsy, a veteran sharpshooter who volunteered for the spot after everyone else refused to put their hands in the life of a new recruit. On one of his first assignments, the pair was ambushed by Cook-Cook's group of Fiends. 10 of Spades was knocked out early in the fight, something he cannot forgive himself for, as his partner was then raped by the Fiend leader and left for dead.[4][5]

If asked about how to help Corporal Betsy he will recommend Doctor Usanagi, who helped him with his stuttering.[6]

Upon completing the Driver Nephi portion of the Three-Card Bounty quest by claiming Nephi's bounty, the entire 1st Recon moves to Camp Forlorn Hope to help with the Legion at Nelson. 10 of Spades can then be found in the Camp Forlorn Hope mess hall.

10 of Spades is one of the shortest characters in the game, similar to the height of legionaries.

10 of Spades appears only in Fallout: New Vegas.

Retrieved from "https://fallout.fandom.com/wiki/10_of_Spades?oldid=3304303"
Community content is available under CC-BY-SA unless otherwise noted.