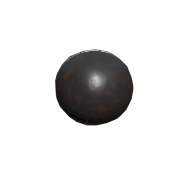 .50 caliber balls are a type of ammunition in Fallout 76.

.50 caliber ball ammunition is a half-inch lead ball used in muzzleloading weapons. A separate charge of black gunpowder must also be loaded, although no gunpowder will be consumed when using any weapon that fires this ammunition.

With the Ammosmith perk or Ammo Factory legendary perk, the crafted amount of .50 cal balls increase incrementally, coinciding with the perk's added percentages, crafting more balls for the same amount of materials.