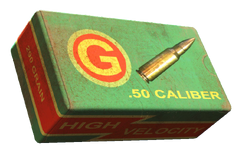 The .50 caliber is a type of ammunition in Fallout 4.

High performance centerfire rifle ammunition manufactured by Circle G ammunition. They are advertised as being manufactured to the highest tolerance for discerning shooters. Before the Great War, these rounds were sold in boxes of ten cartridges.

The box states that the bullets are 290 grain, boat tail hollow points.

As compared to other ammunition types, .50 caliber is quite uncommon, and when it can be found at vendors, it is rather expensive. It may sometimes be found on dead raiders and in ammunition boxes in varying quantities.

Retrieved from "https://fallout.fandom.com/wiki/.50_caliber_(Fallout_4)?oldid=3363511"
Community content is available under CC-BY-SA unless otherwise noted.