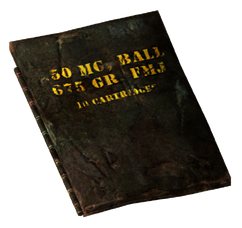 .50 MG is a type of ammunition in Fallout: New Vegas.

The .50 MG is a large caliber heavy machine gun and long-range anti-materiel rifle round. It is the largest, heaviest, and most expensive conventional Guns ammunition in the game. It has a weight of 0.25 pounds per round in Hardcore mode, the same weight as a 25mm grenade.

Standard and match .50 MG rounds can be crafted at a reloading bench. A single cartridge requires the following ingredients:

Breaking down a .50MG yields:

Armor-piercing rounds are designed to pierce through armor plating; for this purpose, they have a specially hardened penetrating tip. Due to the high muzzle velocity and penetrative properties of the bullet, damage to the target is slightly reduced. These rounds are best used against hardened or armored targets, where penetration is necessary. It will negate 15 points of a target's DT but has a damage multiplier of .95.

Match rounds are high-quality rounds manufactured to have identical powder amount, shape, and weight. Match rounds will always be more effective than AP if the weapon condition is more than 75% (the match round does 24 more damage than the AP when used adequate condition and skill). When the anti-materiel rifle is utilizing this round, it has the lowest spread of any weapon in the game other than the alien blaster and Elijah's jury-rigged Tesla cannon, which have no spread at all. It requires the Hand Loader perk to craft.

Incendiary rounds are designed for igniting targets and are usually used for equipment disposal at extreme ranges. They effectively replace hollow points for .50 MG weapons, as they are more effective on unarmored or lightly armored targets due to the added incendiary effect. .50 MG incendiary rounds are affected by the Pyromaniac perk, however, due to the pricing, these munitions must be used with discretion.

Only available with the Gun Runners' Arsenal add-on, these rounds are designed to create a secondary explosion upon impact with their target and are particularly useful against hard armored targets. The explosion created by the round has splash damage, can knock down targets, and is useful for taking out or damaging small groups of enemies if they are close together. The explosive effect can also be used to damage enemies otherwise unable to be hit with direct fire (e. g. for an enemy behind a rock, but in front of a building, the splash damage from the round detonating on a building can be used to inflict damage, with more precision than other explosive launchers).