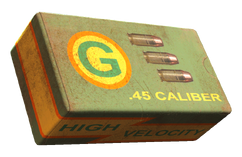 The .45 round is a type of ammunition for use in weapons in Fallout 4.

The .45 Auto is an effective pistol cartridge for use against soft, unarmored targets. It combines accuracy and good stopping power, with low visibility and moderate recoil. They were manufactured before the Great War by Circle G under their "High Velocity" brand, and are in green box.

The .45 round is a hard-hitting ammunition type that becomes commonly used by raiders, Gunners and mercenaries around level 20. At marketplaces, it is possible to buy in bulk from weapons vendors.

Although the .45 round is portrayed as a short pistol round on its editor model, shell casings, and box art, the rounds used in the pipe bolt-action, pipe gun, pipe revolver and radium rifle are visually much longer, similar in dimension to the .45-70 round. 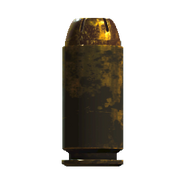