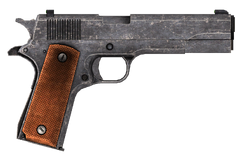 “This type of .45 Automatic pistol was designed by one of my tribe almost four hundred years ago. Learning its use is a New Canaanite rite of passage.”— Joshua Graham

The .45 Auto pistol is a weapon in the Fallout: New Vegas add-on Honest Hearts.

The .45 Auto pistol is a single-action, semi-automatic, magazine-fed handgun that utilizes .45 Auto ammunition. While the .45 AP improved sights modification was cut from the game, the sights are still present on the weapon's default model (pre- and post-modified versions). This gives the .45 Auto pistol luminescent sights, and as such, it is very effective in caves and dark areas.

Furthermore, it is considered an improved holdout weapon and can be taken into weapon-free locations with a Sneak skill of 50 or greater. It also has the highest base damage of any silenced holdout weapon once the AP silencer mod has been added.

According to Joshua Graham, it is based on a nearly 400-year-old design from one of his Mormon ancestors and receiving one is a New Canaanite rite of passage in his tribe.

.45 Auto pistol with the silencer modification

.45 Auto pistol with both modifications

.45 Auto pistol with the silencer modification and the non-playable iron sights

.45 Auto pistol with all the modifications and the non-playable iron sights
Add an image to this gallery

Retrieved from "https://fallout.fandom.com/wiki/.45_Auto_pistol?oldid=3231758"
Community content is available under CC-BY-SA unless otherwise noted.