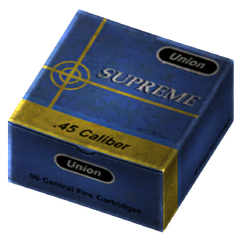 .45 Auto is a type of ammunition in the Fallout: New Vegas add-on Honest Hearts.

The .45 Auto is an effective pistol cartridge for use against soft, unarmored targets. It combines accuracy and good stopping power, with low visibility and moderate recoil. Among the Mormons of New Canaan, it was the ammunition of their signature weapon, the .45 Auto pistol. After the completion of Honest Hearts, the ammunition type will also begin appearing in the base game traders inventories (Gun Runners, Cliff Briscoe, Mick & Ralph's etc.).

Standard, +P and super .45 Auto rounds can be crafted at a reloading bench. A single cartridge requires the following ingredients:

Breaking down a .45 Auto round yields:

Overpressure .45 Auto ammunition has larger powder loads, allowing it to perform better against a variety of targets. As the round is fired at a higher velocity, it has better stopping power and negates enemy protection well.

Federal Cartridge hollow point bullets feature a hollowed out shape at the tip of the bullet.

.45 Auto weapons were specifically created for Honest Hearts, and were not intended to be included in the base game.[Non-canon 1] 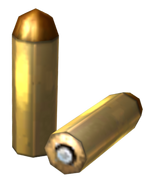