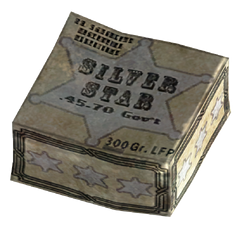 A powerful, .45 caliber, late 19th-century era black powder rifle round, .45-70 Gov't (Government) rounds are one of the rarer types of ammunition found in the Mojave Wasteland. However, especially at higher levels, they can be bought in decent quantities from some merchants.

Standard and SWC .45-70 Gov't rounds can be crafted at a reloading bench. A single cartridge requires the following ingredients:

Breaking down a standard .45-70 round yields:

Hollow point bullets mushroom or fragment on impact, causing massive trauma to unarmored targets, similar to those of buckshot. However, since the bullet loses almost all of its energy upon contact, it will hardly be able to penetrate armored targets. Certain weapons such as the Medicine Stick, combined with 100 Guns skill, as well as perks such as Cowboy, Bloody Mess and other damage boosting perks can result in the total damage exceeding the 3x DT multiplier of these bullets.

Flat-nosed round designed to deal maximum damage to targets at close range by tumbling when it hits. This type of round was originally designed to shoot paper targets. This ammunition type puts a severe strain on a gun's condition due to its extremely heavy powder load. It requires the Hand Loader perk to craft.