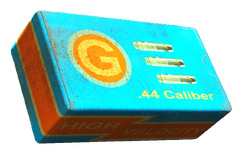 .44 rounds are a type of ammunition in Fallout 76.

This section is transcluded from .44 Magnum. To change it, please edit the transcluded page.

The powerful .44 Magnum round was originally developed for revolvers and then adapted for pistols and even rifles. It is a large-bore cartridge delivering a heavy, sizable bullet at very high velocities. Its excellent stopping power and range results in plenty of recoil and a distinctive muzzle blast. However, it remains well suited for any inhabitant of the wasteland needing a round capable of stopping monsters, human or otherwise.[Non-game 1]

The .44 round is a powerful rimmed centerfire cartridge produced by Circle G ammunition. The ammunition came packaged in fifty round bright blue and orange boxes. .44 rounds are used exclusively by the most powerful per shot cartridge firing pistols in the game. 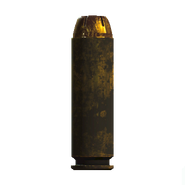