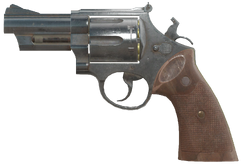 The .44 pistol is a weapon appearing in Fallout 4.

The .44 pistol is a double-action revolver, chambered in the .44 Magnum cartridge, with a blued finish and wooden grips. It doesn't have as many customization options as most pistol frames, but these firearms boast considerable ballistic damage.

These pistols are relatively common, and they can be found or purchased throughout the Commonwealth. Aiming down sights is ill-advised for close encounters due to the strong recoil, and with the proper mods it can be made quite accurate for firing from the hip.

The Nuka-World add-on adds an additional barrel to this weapon's available modifications.