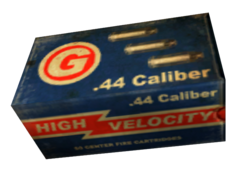 The .44 Magnum round is a type of ammunition in Fallout: New Vegas.

The .44 Magnum round is a high powered Magnum pistol cartridge derived from the .44 special pistol round. The round can be utilized for revolvers and carbines.

Standard and SWC .44 Magnum rounds can be crafted at a reloading bench, with the latter requiring either the schematics (obtainable from Jules after passing a check for Guns (50) and Survival (60)) or the Hand Loader perk. A single cartridge requires the following components:

Breaking down a .44 Magnum round yields:

This flat-nosed bullet is effective against higher-level enemies and can penetrate armor. These characteristics make it much more effective than standard ball ammunition. 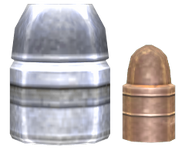