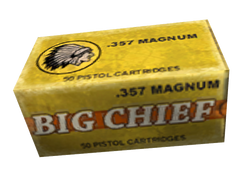 The .357 Magnum round is a type of ammunition in Fallout: New Vegas.

The .357 Magnum round, a Magnum handgun cartridge manufactured by Big Chief, has a significant powder load making it a very powerful cartridge for a pistol round, and acceptable for use in carbine length lever-action rifles.

.357 Magnum standard and JFP rounds can be crafted at a reloading bench. A single cartridge requires the following:

Breaking down a standard .357 Magnum round yields:

Hollow point bullets are designed to mushroom out, expanding up to 1.5 times their original size. This results in a jagged, gory wound significantly larger than the actual round. Hollow points lack the penetrating power to punch through denser material because their force is distributed over a larger area, drastically reducing the weapon's penetrating power.

JFPs (or jacketed flat points) are blunt, copper-wrapped bullets designed to flatten on impact like a hollow point, but retain the penetrating power of a copper-jacket slug. As such, they inflict greater damage, penetrate enemy armor better, and even fly straighter than normal .357 rounds. They require the Hand Loader perk to craft.

.38 Special rounds are a less powerful cartridge than .357 Magnum rounds. They can be fired from any weapon capable of firing a .357 Magnum because the latter was developed from the .38 Special round, and, despite the name, they share all the same dimensions except case length. Though the reduction in powder means less damage inflicted on the target, it also means less wear and tear per shot on the gun. 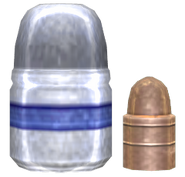 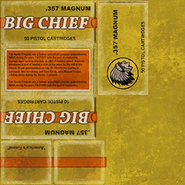