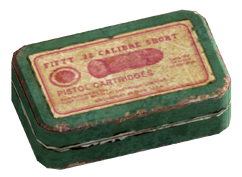 The .32 caliber round is a type of ammunition found in Fallout 3.

It is used with the .32 pistol, the hunting rifle and their unique variants. Generally speaking, the .32 round is second most common Small Guns ammunition found in the game, behind 10mm rounds. After Picking Up the Trail, it becomes less available as enemies start carrying assault rifles in place of hunting rifles.

These rounds are not particularly useful, as the .32 pistol is far weaker than the 10mm pistol the Lone Wanderer is given early in the game. The hunting rifle is eventually superseded by the sniper rifle, but as .308 caliber rounds are not as common and super mutants have a strong tendency to carry hunting rifles, it may be necessary to rely on .32 caliber rounds for long range combat.