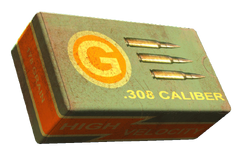 The .308 round is a type of ammunition for use in weapons in Fallout 4.

A box of high-powered .308 rounds, found in a large number of locations. Boxes state that they are 178 grain, boat tail hollow points. Prior to the Great War, they were manufactured by Circle G and sold with 20 cartridges in a box.

Retrieved from "https://fallout.fandom.com/wiki/.308_round_(Fallout_4)?oldid=3363505"
Community content is available under CC-BY-SA unless otherwise noted.