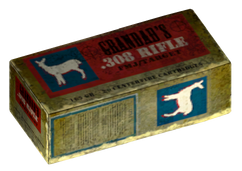 .308 bullet compared to .22LR bullet (left) and complete round (right)

The .308 round is a type of ammunition in Fallout: New Vegas.

This section is transcluded from .308 round. To change it, please edit the transcluded page.

The "Grandad's" brand and "Circle G" brand .308 caliber rounds were a full-size rifle cartridge used primarily in hunting rifles in the United States before the Great War. In the post-War era, they have become a cartridge of choice for high-power conventional weapons and long-range sharpshooters.

The .308 round is the same as the Fallout 3 version and is still used by the sniper rifle and now the hunting rifle. However, the world model for the round was changed from a metal ammunition box to a cardboard box.

.308 standard and JSP rounds can be crafted at a reloading bench. A single cartridge requires the following:

Breaking down a standard .308 round yields:

Armor-piercing rounds are designed for punching through armor plating and for this purpose, they have a greatly strengthened case with a specially hardened core and shaped nose. Due to the high velocity and penetrative properties of the round, the target's DT is reduced by 15. However, due to the limited expansion of the armor-piercing round, damage to the target is reduced by 5%.

Hollowpoint bullets mushroom and break upon impact, causing massive trauma on fleshy, unarmored targets. However, this also means they break up when they hit armor plates, drastically reducing the weapon's penetrating power.

Jacketed, soft point ammunition is designed with a semi-jacketed harder metal coating with a soft bullet tip. It offers evenly managed damage and penetrative power. This round will do more damage than armor-piercing rounds and hollow point rounds in most situations making it the best all-round .308 ammo. Originally tagged with a 1.5x damage multiplier, as of patch 1.3.0.452 these rounds now only do 1.3x damage and deteriorate the gun 50% faster than normal. They require the Hand Loader perk to craft.