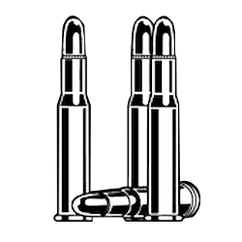 The .30-30 round was a type of ammunition that was planned for inclusion in Fallout: New Vegas. From the Pip-Boy icon, the .30-30 round would have been a soft-point, also known as soft-nose, bulleted cartridge that likely would have been chambered in a lever-action rifle like the cowboy repeater or trail carbine. .30-.30 rounds were cut from the game due to it supporting few weapons on its own and having too much overlap with .308.[1]

The only existing evidence of this cartridge is present in the game files, as an unused icon for the Pip-Boy 3000.

Retrieved from "https://fallout.fandom.com/wiki/.30-30_round?oldid=2725593"
Community content is available under CC-BY-SA unless otherwise noted.