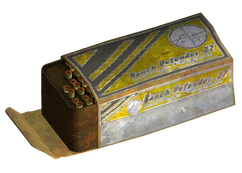 The .22LR is a very low powered round, especially when compared to the more common .223, .308, .44, or .45 Auto cartridges that are also used in the post-war world. The .22LR was used as a commercial small game hunting round, but wasn't as common on the East Coast as the .32. It has a self-contained "rimfire" primer and thus cannot be broken down to gain small pistol primers, nor can it be crafted.

Retrieved from "https://fallout.fandom.com/wiki/.22LR_round?oldid=1902772"
Community content is available under CC-BY-SA unless otherwise noted.