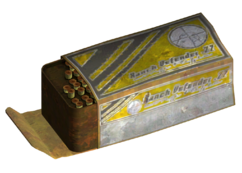 The Junk Rounds perk from the Dead Money add-on was at one point intended to create ammunition of a special subtype, called "junk" or "JNK," these rounds all provided the same modifiers regardless of caliber: x 0.75 to damage and 1.5x to condition. The rounds still remain present in-game files but are not utilized within the game itself and if obtained, cannot be used in any weapons, even those chambered for the correct caliber.

During development, the varmint rifle was meant to be chambered for the .22LR round, which would have made the ammunition much more commonly available. However, the significantly reduced limb damage penalty for .22LR rounds (prior to patch 1.3.0.4xx) made the weapon so unpopular that "no one wanted to use it," according to J.E. Sawyer. The weapon was changed to a 5.56mm/.223 weapon instead.[1]

Retrieved from "https://fallout.fandom.com/wiki/.22LR_round?oldid=3524752"
Community content is available under CC-BY-SA unless otherwise noted.