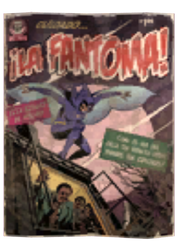 ¡La Fantoma! is a skill magazine in Fallout: New Vegas.

Reading this magazine raises the player character's Sneak skill by 10 points (20 points with the Comprehension perk) for 60 seconds (180 seconds with Retention).

Below is a list of all fixed locations of the¡La Fantoma! skill magazines in Fallout: New Vegas and its add-ons. For an overview of magazines per location, see the main overview page.

Near Powder Ganger camp west with other goodies
Add an image to this gallery
Retrieved from "https://fallout.fandom.com/wiki/%C2%A1La_Fantoma!?oldid=3237483"
Community content is available under CC-BY-SA unless otherwise noted.