The VB-02 Vertical Take Off and Landing (VTOL) craft, codenamed Vertibird, is a U.S. military multipurpose tiltwing aircraft primarily used by the Enclave in the post-War United States.

The Vertibird has a heavily armored fuselage and can be outfitted with a variety of offensive weapons and defensive countermeasures, the most common being Gatling lasers, missile racks, and a mini nuke bed. It is unknown how a Vertibird is powered, however the Enclave required Navarro for refueling. It has a winch that can haul several tons of equipment - or a large deathclaw cage.

The Vertibird was still in the prototype phase when the Great War struck in 2077, preventing it from entering full military service which was scheduled for 2085.[1] However a prototype model in winterized camouflage can be seen during the Operation Anchorage simulation dropping U.S. troops before taking off again. However, the trial aircraft that were already produced and in the field were seized by Enclave members and loyalists and either transferred to their bases or secured in shelters. The Enclave began mass-producing the design in secret, and now the Vertibird is the general-purpose delivery vehicle of the Enclave's military forces. Capable of surgical insertions, extractions and close air support alike, the Vertibird is synonymous with the Enclave in general, and a good representative of their power as a whole.

There are two known versions of the craft used by the Enclave:

Events related to the Vertibird編集

Vertibird range was at least 175 miles distance between the Enclave Oil Rig and California. Accessible were Klamath, New Reno and Vault 13. According to the Shi, Vertibirds flew over San Francisco on the way from Navarro to the Enclave Oil Rig.

The Vertibird's VTOL flight mechanics allow it to approach landing zones with the speed of a fixed-wing aircraft and transition into a hovering mode of flight, by tilting its rotors vertically upwards 90 degrees. Given this extreme amount of maneuverability, the VB-02 is regarded as a formidable force in the Fallout universe.

While the design of a Vertibird is convenient, its dual rotor-blades serve as a flight hazard, for if the aircraft were to suffer a single rotary malfunction at a substantial altitude, the VB-02's airframe and distribution of down-wash would cause the aircraft to fall on its side in a dramatic and likely fatal crash.

Vertibirds are mostly support craft, but they will attack in a few circumstances. They are a significant threat for a wide array of reasons, but the biggest is that they pack an enormous amount of firepower on an extremely well-armored chassis. Their weapons include a nose-mounted Gatling laser, a pair of missile launchers, and a bomb rack for mini nukes. All of these weapons are threatening; the missile launcher deals heavy damage and can knock an opponent back. The Gatling laser can deal a lot of damage from afar, and the mini nukes, used in airstrikes against heavy targets and emplaced defenses, can instantly kill a hostile.

Fortunately, the Vertibirds the player character faces are usually set for a specific assignment - either dropping Enclave troops off, or flying racetrack circles and providing fire support. Vertibirds on insertion/extraction duty are not capable of attacking, but their dropping off troops can be problematic, as Enclave soldiers are one of the toughest hostile factions in the Capital Wasteland.

Vertibirds tasked with fire support are the biggest threat, as they eliminate engaging hostile forces to back up Enclave troops on the ground. These Vertibirds often perform bombing runs, and make several passes to eliminate any resistance in the area. Vertibirds on these support flights may open fire with their missile launchers or Gatling lasers, though they do not use them as much as their mini nukes.

Vertibirds can sometimes be encountered on the ground. One noteworthy instance is on the steps of the Capitol Building in the Capital Wasteland. In these cases, upon finding one of the parked Vertibirds, there should be a cage containing a deathclaw inside. When engaged in combat, the Enclave officer nearest to the cage will often let the deathclaw loose.

In Fallout 3, Vertibirds can be destroyed with heavy ordnance, however they cannot be targeted in V.A.T.S. The resulting explosion will scatter a great deal of debris, which will be visible to the player character. A Vertibird explosion is significantly more powerful than that of a car or truck and will kill or seriously injure anyone nearby. The explosion can also kill disembarking Enclave troops, however this can be unreliable due to bugs.

As the main producer of the pre-War design, the Enclave hold the world's largest fleet of VB-02's.

The designation "VB-02" would, in real-world US military usage, indicate that it is a bomber aircraft. As the Vertibird's primary roles appear to be transport and ground attack, the "VB" prefix seems to be simply intended as an abbreviation of Vertibird. In post-1962 US Department of Defense nomenclature, the transport variation's designation would probably be CV-2, meaning "cargo/transport VTOL, design number 2", with the gunship variant being "A/CV-2", meaning "Attack Purposed, Cargo/Transport VTOL, design number 2".

Enclave soldiers in front of a Vertibird.
このギャラリーに画像を追加

Brotherhood of Steel Vertibird landing on mobile base crawler

A gunship Vertibird outside Arlington Library 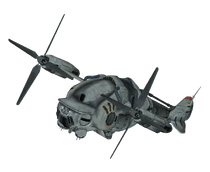 A Winterized Vertibird taking off in Operation Anchorage 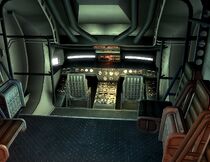 Cockpit of a Gunship variant 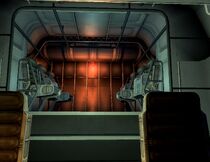 Inside of the Vertibird 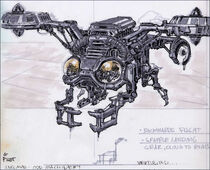 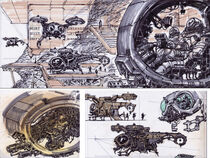 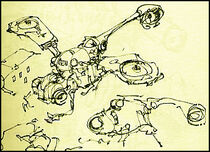 In Fallout 4, the player character can summon a vertibird to their location using a flare, which flies them to a destination of their choosing. The player can use the minigun on the side, as well as being able to jump out or order an early landing. These models differ from all other vertibirds seen throughout the franchise. Whether the vertibird in the Commonwealth are a different model from the VB-02 or are a prototype of the VB-02 is unknown. The same model of vertibird can be seen on the day of the Great War at the beginning of the game.

As seen during gameplay at the E3 Showcase
このギャラリーに画像を追加