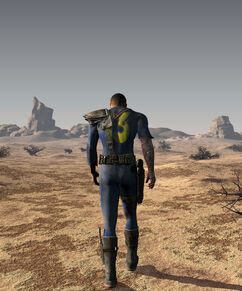 Exiled from the Vault

None could stand in my way. I had a mission. I had a goal. I had a really large gun.

In a general sense, a vault dweller is any person who lives in one of the Vault-Tec Vaults.

When capitalized, the Vault Dweller is the player character in Fallout, most famous for defeating the Master and his super mutant army, helping Shady Sands grow into the New California Republic, founding the small village of Arroyo and fathering its Elder (who too would bear a child; "the Chosen One").

Vault 13's overseer, Jacoren, sent the Vault Dweller out on a mission to find a replacement for the Vault's broken water chip. After striking a deal with the Water Merchants of the Hub and obtaining a water chip from Vault 12 in the ruins of Bakersfield, the Overseer told him that the amount of super mutants located in the area did not match up with natural rates of mutation.

Believing that someone must be artificially creating the super mutants and fearing for the safety of the Vault, he ordered the Vault Dweller to find and destroy the source of the mutants. The Vault Dweller soon found an old military base where humans were being dunked into vats of Forced Evolutionary Virus in order to be converted into super mutants. He destroyed both this base and the Master of the super mutants beneath the Cathedral in Boneyard before returning to the Vault, only to be told that he saved the lives of the vault and maybe even the human race but is forced out because of Jacoren's fear that everyone in the vault would want to leave.

I'm sorry. You're a hero, and you have to leave.

Two months later, the Vault Dweller headed north, to the great canyons, with a small group of vault dwellers and wastelanders and founded a small village. Initially, they would send scouts back towards the Vault, to help others who thought like themselves, but that slowly came to an end. The Vault Dweller taught the others the skills they would need to survive and grow strong. Hunting, farming and other skills to feed them, engineering and science to build their homes, fighting to protect what was theirs. Slowly, they took the knowledge that the Vault Dweller had learned on his adventure and together, they learned to thrive. Over time, their rag-tag group had turned into a tribe. The Vault Dweller fell in love with one of them, named Pat, and they raised a family, like all of their tribespeople. The construction of Arroyo was completed on August 18, 2167.

The Vault Dweller and Pat led the tribe which grew larger and stronger. In 2188, their daughter, who would later become the Village Elder, was born. Eventually, she and the other children became the leaders of the community.

After leaving Arroyo the only known place where he was spotted was the town of Carbon, where he is known simply as the Wasteland Stranger. There, he helped some of the people to hide from raiders and also helped the Initiate trace the remnants of the Master's army and some Brotherhood of Steel paladins, directing him to Los. We don't know what became of him afterwards, but it is certain he left Carbon and continued his travel in the Wasteland.

Besides Arroyo and the Chosen One, the Vault Dweller's journey lived on to the extent that he is still revered by a fair portion of the people in the Wasteland. His statue is prominently displayed in the New California Republic capital, Shady Sands.

He is remembered under several names, including "the Vault Dweller" and "the Stranger" (used by those who - while believing in his greatness - doubt he ever could have come from a Vault). He refers to himself as "the Wanderer" at the end of his memoirs. Children who heard of his story would often play at finding Vault 13, some of these children even grew into adults obsessed with proving the Vault Dweller's former home existed. For a time, President Tandi would even sponsor such adventurers, until giving up after many years of failure.

Although he only personally appears in two games out of the Fallout series, the Vault Dweller has been mentioned in every other Fallout game up to date.

I always thought of Fallout's story of drawing straws was something the Overseer thought of. "Look, someone has to go outside, and they may die out there, so let's draw straws". Someone, probably not the Overseer since he wouldn't have gone outside no matter what, demanded that EVERYONE draw a straw in order to be truly fair. But to be honest, the vault dwellers were simply terrified of going outside, and terrified people do not always make the wisest decisions.

Anyway, when big dumb Larry drew the straw, maybe the Overseer saw a way to rid their limited gene pool of some really bad alleles.

The Vault Dweller in Fallout: Brotherhood of Steel

Pre-released representation of the Vault Dweller on a magazine cover

The Vault Dweller in Vault Boy form in his memoirs