Get a plow for Mr. Smith
Deliver a sample of jet to Dr. Troy
Find Mr. Nixon
More... 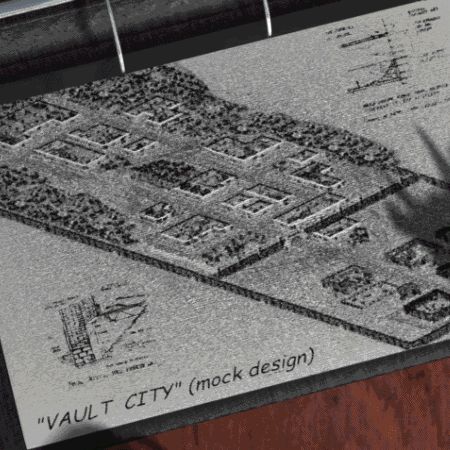 Vault City is a high-tech settlement in western Nevada, established by the dwellers of Vault 8 after the Great War.

Vault City sprang from a vault that opened, as planned, several decades after the bombs dropped. The inhabitants used their G.E.C.K. and soon it became a prosperous city. Unfortunately, the citizens have turned inwards and revel in ethnocentric elitism, rather than expanding their horizons. Vault City is like a well-crafted plastic apple - pretty to look at, but unchanging and hollow.[1]

According to Chris Avellone, the Vault opened in 2091 after receiving its all-clear signal.[2] This is supported somewhat by dialogue with Joanne Lynette where the Chosen One claims Vault City opened 70 years before the Vault Dweller stopped the Master in 2162, or 2092.[3] Joanne Lynette herself claims Vault City received its signal 2 years after it was sealed, but opened 120 years before the events of Fallout 2 (2241-2242), within the years 2121-2122.

According to Lynette, surface sensors monitored by staff was the source of the all-clear.[4] Due to the lack of confirmation from dialogue with Vault 8's central computer that Lynette defers the Chosen One to, [5] it is entirely possible that the all-clear signal came from the Enclave[6]

The city was subsequently built around the Vault, using its fusion generator as a power source, as well as knowledge contained in the G.E.C.K to establish the first of their structures.

The city population in 2241 was 103 citizens, and an unknown number of non-citizen servants and courtyard residents.[7]

Vault City is a very small, but high-tech settlement. The citizen population (in all departments) was 103 in 2241, with an unspecified number of outsiders residing in the courtyard area. It was small compared to the hundreds of residents that lived in Redding or Broken Hills.

Despite its small size, the city boasts sophisticated technology, they're one of the most advanced factions in the wasteland, possessing cutting edge medical technology, allowing it to mass produce medical supplies and chems (such as stimpaks) as well as perform radiation removal and sophisticated surgical procedures, including replacement of lost limbs and organs via cloning and grafting armor plating to one's skeleton. Aside from medical technology, it's also an advanced military force, with all guards and patrolmen rigorously trained and equipped with advanced weapons and armor.

The city's ruled by a Council, led by the First Citizen, established in 2101, after the Vault Overseer retired. The council rules in a completely authoritarian way, controlling every aspect of life within the City. Their regulations are strict and enforced to the full extent of the law. For instance, no drugs, real alcohol (artificial imitations are legal), prostitution, gambling or any other vices are allowed within the inner city. All citizens found breaching any regulations, be it even badmouthing the First Citizen, are usually swiftly incarcerated and reeducated. Non-Citizens, who are servants, are forbidden to even look at the city and must stare upon the ground or be punished for setting their impure eyes upon their city. Those possessing day passes are allowed a daylight tourist proceeding.

The Citizens are no better, as most are extremely bigoted, hypocritical and arrogant, treating outsiders questionably and leading mostly conformist lives, content with their state of affairs. Although healthy and very well educated, they are uncaring of the outside world. Many do not even venture beyond the protective walls of the City proper.

The courtyard is the place where outsiders (wastelanders) are settled. It isn't much, as people are disorganized, some even are locked in jail.

Downtown is the area where Vault citizens trade for supplies. Wasteland merchants can trade here if they have a Day pass, but even then they are not to be trusted, according to the citizens.

This is home for the Vault citizens. Here is the Council building where important decisions are made for the Vault City. One can apply a citizenship test, but only if they have the skills to do it.

Vault 8 was designed as the control group for the vault experiments. It remained in pristine condition by 2241. Every element of the vault is still intact, from the Overseer's chair to the entry door. It is thanks to the Vault's nuclear energy[8] production that Vault City's power is supplied, though its capacity has severely limited the expansion prospects of Vault City. The majority of the vault is now unoccupied and used for storage. Interestingly, the Vault had two sets of doors - massive external blast doors and a regular, round Vault-entry door.

The city is very apathetic towards outsiders, generally considering them thieves and blackguards, however, if an outsider is able to pay the rent, they can live in the "Courtyard" of the Vault City, protected by its walls and heavy laser turrets, but with no access to other city services, like the Amenities office or the Vault medical lab, as those are reserved for full citizens. The courtyard is kept peaceful and protected from the raiders of the wastes by Vault City, but its denizens are subjected to harsh rules and regulations and taxed heavily. Denizens of the courtyard feel squeezed between the desolate horror of the wastes outside and the suffocating repression of Vault City: they hold both new arrivals from the wasteland and the Citizens of Vault City in contempt.

Outsiders can enjoy the benefits of the city if they become Servants, which unofficially means becoming slaves. Vault City residents claim that it is just because they give the servants shelter, food and protection, but people like Thomas Moore object to this heavily, and call it hypocrisy since they frown at those who openly call it slavery and do slaving (the Den, for instance).

Despite their antipathy to the outside, the city maintains regular caravan routes with other cities, trading its superior medical technology for raw materials, fuel, mechanical equipment and other items.[9]

Day passes are issued to non-citizens able to provide a bona fide reason for entering Vault City. (Examples: slaves, uranium, gold, or gecko pelt traders, diplomats, and non-citizen agents of Vault City.) Day passes allow a non-citizen access to Vault City proper during daylight hours, (8.00am until 6.00pm) but not the original Vault 8 itself. While the customs office is nominally strict in its rules regarding the issuance of day passes, there are some corrupt elements willing to sell false citizenship papers. Perhaps the easiest approach to gain one is to remove one's armor to reveal their jumpsuit before talking to Wallace, who will grant immediate access and advise going to see First Citizen Lynette immediately.

Gecko, the settlement of ghouls in the north-east has been more trouble for Vault City. Apparently, they wanted some medicine and supplies for their health, but considering their appearance, Vault City objected, so Gecko ghouls do not trust them, calling them foul and poisoning the water supplies, so Vault City needs to shut down their power plant.

Although Redding may appear unassuming, it has great economic clout. Redding is northern California's primary producer and distributor of gold. Being the center of gold mining several larger political factions have volleyed for control of Redding to gain dominance in the gold trade. Vault City advocates claim it's the only city that can fully utilize Redding's potential and dismiss any worries that they might turn it into a slave labor camp. Doc Johnson is a staunch supporter of Vault City, turning a blind eye to the obvious mistreatment of non-citizens within its walls. He is one of the potential candidates for the office of mayor, and wants to put an end to the miners' dependence on jet.

The expanding Republic considered Vault City a fantastic candidate for inclusion into its growing organism, however, offers of joining were repeatedly declined, with Vault City preferring to stay independent. With no progress being made on the diplomatic side, the NCR Congress approved a secret initiative intended to force Vault City to join, but it is currently unknown if this operation succeeded.

Despite being warned to "avoid Broken Hills at ALL costs", Vault City and Broken hills maintain trade relations, trading uranium for medical supplies (in particular Rad-X and RadAway).[11]

The Vault City guard is the direct descendant of Vault security team - a Vault police force. Vault City guards act as a universal military force, enforcing the law within town, defending it and securing Vault City perimeter. While small, it is extremely well trained and equipped, able to deal with any threats when supported by laser turrets of the City, save for an all-out siege.

主要記事: Captain of the Guard

Captain of the Guard is a title granted by the First Citizen of Vault City to exemplary citizens that have gone above and beyond the call of duty to protect the city's interest and independence. In essence, it is the highest military rank one can hold, giving them full authority over the military might of Vault City.

Generally, the only normal way to become a Citizen of Vault City is to be born into it. Personal intervention by the Senior Councilor (in 2241 McClure) or the First Citizen (in 2241 Lynette) can grant a non-citizen citizenship (though this is never done lightly). In addition, non-citizens can take a citizenship test (administered by the Proconsul, in 2241 Gregory), which is intentionally designed to be so difficult as to be virtually impossible by someone not of extraordinary intelligence, perception, and luck. The test is so difficult that the majority of born citizens would fail it were they to take it. Some of the subjects covered by it include advanced mathematics, spatial relations, deductive reasoning and language comprehension. A thorough physical exam is also included.

Vault City appears only in Fallout 2 and is mentioned in Fallout: New Vegas and its add-on, Lonesome Road.