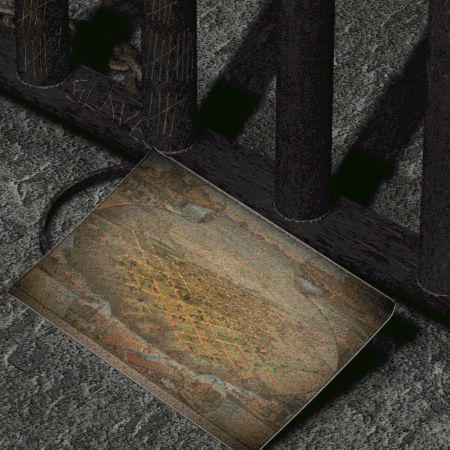 The Den is an anarchistic place where a kind of Darwinian struggle is played out. Only the strongest, fastest or smartest will survive here.

The Den would be a seething cesspit of vice if it were just a little larger; as it is, the best it can manage is a slow boil of greed, avarice, and self interest rule in this small town. You could even say that the church has been rededicated to the pursuit of greed.[1]

The East Side is where the Slaver's Guild has its headquarters. There is also an old church, a graveyard, Mom's Diner, and the Hole Bar. Digging up any grave besides Anna's will drain a lot of Karma. The graves in the graveyard, starting with the one in the upper right, can be dug up for some items.

There is also a part called the Residential, but it can only be accessed by pressing the 3 key when you the picture of the Den is shown (also works from the map itself). It is home for the citizens of the Den. There are four buildings, and many squatters around the area. Here, the cut quest to find a way to get the orphans off the streets would take place. It was presumably cut from the game.