Banner as seen in Fallout 3 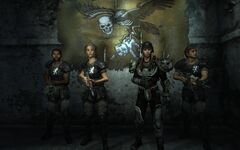 No job is too nasty for the mercenaries of Talon Company. If you encounter these heartless opportunists, be prepared for a fight to the death.

Talon Company is a mercenary organization active in the Capital Wasteland. They take various jobs, from bounty hunting to fighting against the super mutant occupiers of Washington, D.C. Even as far as mercenaries go, these men and women are vicious, killing anyone who does not wear their emblem (similar to raiders). The reason for this is simple: in 2277, they are working for an unknown third party, with simple orders: keep the Capital Wasteland a lawless, disorganized place.

The Talon Company is the largest of the mercenary groups in the Capital Wasteland. They can be found almost anywhere in the DC area. They put cash and loot ahead of almost anything, and will attack most groups on sight in the hopes of taking their belongings. Currently an unknown benefactor has hired the Talon Company to hunt down do-gooders. The reasons for this are unknown, but the effect is to keep the wasteland a lawless place where the guys with the biggest guns make the rules. The Talon Company frequently has the best firepower in terms of secondary faction.[1]

Because they are hostile to almost anyone but themselves, they are always hostile towards the ローンワンダラー if encountered, but they will generally not hunt them without meeting either requirements:

In the Capital Wasteland area, Talon Company's central base of operations is バニスター砦 where their leader Commander Jabsco resides, although they do have other outposts as well, such as a camp for travelling mercenaries west of Grayditch. They are also engaged in a large battle with the super mutants in and around the Capitol Building, Takoma Park, and the Clifftop Shacks, though the purpose of the battles is unknown. One can sometimes come across a fire team of three mercs, patrolling through the Wasteland or in various towns. If they have a contract for one's death, they may also be ambushed by them after either fast traveling or zoning to a new location. They seem especially fond of certain subway entrances, including the ones in Grayditch, next to Rivet City, Flooded Metro, and south of Wilhelm's Wharf.

Killing these fire teams provides a good supply of armor and ammunition, as they each wear a customized variant of combat armor and tend to have more advanced weaponry as one levels up. Indeed, it could be argued that one perk of good Karma is that the player character has access to quality armor relatively early in the game. If they would prefer to avoid tangling with the Talons, while also avoiding the Regulators, they should keep a neutral Karma level. At good Karma, they should search Metro entrances for Talon groups and run away if they see them; at the first encounter, the Talons will not attack until they have spoken. If the player character's karma drops to neutral before a Talon Merc is able to speak to them, Talon mercs will stop appearing at potential ambush sites, and will not return until the Karma hits Good again.

Talon Company mercenaries are almost exclusively male. Bodies of female Talon mercs can however be encountered in the bathroom in the Hall of Columns in the Capitol Building, in the Metro Central, and the Corvega factory.

In addition to conventional infantry, Talon Company controls several reprogrammed military Mister Gutsies and sentry bots, which they use sparingly to guard some of their outposts in the D.C. Ruins.

Talon Mercenaries that are known as hitmen (hired by Mr. Burke in revenge for the Lone Wanderer's actions in Megaton) have a different set of characteristics that make them stand out from the average Talon Patrol. Their characteristics consist of light armament, same in appearance (all three mercs are the same character build), and very pale skin. And, looting their bodies reveals a different message.

With the addition of Broken Steel, one can find a group of Brotherhood of Steel Knights outside バニスター砦 who are trying to retrieve a water caravan that the Talons have stolen. There will also be a captured Brotherhood Paladin, Jensen, in the tents in バニスター砦. After releasing him, he will express his gratitude and then proceed into the base to get revenge, quickly followed by his fellow Knights. The Brotherhood will then quickly kill all mercenaries inside the base including Commander Jabsco. This will make proceeding through the fort much easier than going through it alone.

On the highway leading to the Citadel, east of the Nuka-Cola plant, and south of the Red Racer factory, two Talon mercs are fighting with 2 or 3 raiders over a crate containing 4 Aqua Pura barrels. One of the Talon Mercenaries has a flamer.

Outside the Capitol Building there will be a large contingent of Talon Company mercs with varying robots fighting the occupying super mutants. They focus on the super mutants and will not usually attack the PC unless attacked first or they win the battle. If not interfered with they will usually be killed.

When first exiting a store called "Lucky's," which is located southwest of Tenpenny Tower near the southern edge of the game map, a group will appear and attack the Wanderer.

Members of roving Talon Company fire teams typically have either police batons, combat shotguns, laser rifles, or Chinese assault rifles as their primary armament, with no more than one of each encountered per fire team (exceptions: combat shotgun and police baton). Talon Company personnel in set encounters may also have other weapons, such as sniper rifles and missile launchers. Combat knives, .32 pistols, and pulse grenades are often carried as backup weapons. On rare occasions they may all be carrying Chinese assault rifles (or maybe one R91 assault rifle instead) making them even more dangerous than usual (seems more likely to happen at the sewer waystation or sniper shack).

In random encounters, fire team tactics are simple: depending on the weapon type, the mercenary will close to within effective range (if necessary) and engage. At typical encounter distances, this means that riflemen will open fire from where they are, ones who use shotguns will close part of the distance and then open fire, and hand-to-hand fighters will charge at the target.

When they have been contracted to assassinate the Lone Wanderer, the main locations for their ambushes are at the Northwest Seneca Metro Station near Arefu, Anacostia Crossing near Rivet City, Lucky's just near Tenpenny Tower and Warrington station, and the player character can randomly run into them near Megaton or out in the Wasteland (this is the same for the Regulators). They also appear frequently at the Jury Street Metro Station, the Super Duper Mart, and near the Reilly's Rangers location, avoiding them is almost impossible. Thankfully, such ambush will only occur once every location, and their bodies may even remain there if not searched. Talon Company mercenaries also appear to be cowardly, like raiders, they will flee if the tide of the battle is turning against them.

In early previews, Pete Hines was said to have stated that "the humans going up against the mutant occupiers were mercenaries working for the Talon Corporation," referring to them as a corporation rather than a company.[2] 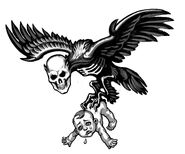 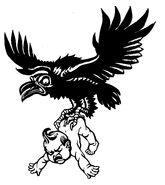