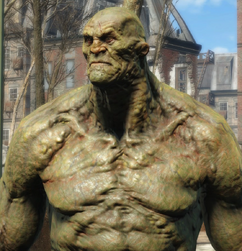 ストロングは、Fallout 4に登場するスーパーミュータントコンパニオンです。 He can be found locked up in a cell at the top of Trinity Tower along with his teacher, Rex Goodman, where the two have been imprisoned by other super mutants.

A usual-looking super mutant, Strong seeks to find the "milk of human kindness." This is a line from the play Macbeth (Act 1: Scene 5,) cited to him by Rex Goodman while trying to teach the super mutants about William Shakespeare's plays. Strong seems to have taken this metaphor a bit more literally and believes that if he can find the milk and drink it, it will give super mutants the strength that makes humans successful.

Strong is proficient with heavy weapons, like missile launchers.

Strong appears only in Fallout 4.