Picking Up the Trail
Rescue from Paradise
Fungus DealLong Road Ahead 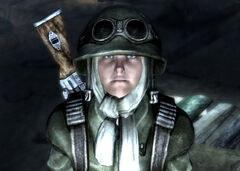 During the decade between 2277 and 2287, MacCready ended up marrying a woman named Lucy and had a son with her named Duncan. When he first met Lucy, he lied to her about his occupation, telling her he was a soldier and concealing the fact he was a hired gun. He never told her the truth. At an unknown point in time, feral ghouls killed Lucy while MacCready fled with Duncan. Some time later, Duncan contracted an unknown disease, prompting MacCready to travel to the Commonwealth to find a cure.

He was employed by the Gunners for some time, but left, and has ever since been hounded by them for continuing to take jobs in their territory. He is still skilled with rifles and can make precise head shots. When the Sole Survivor meets him in The Third Rail, he's talking with two Gunners. After they leave, he can be hired as a companion for 250 caps (can be persuaded down to 200 or 100, depending on the size of the player's caps purse.) After becoming good friends with him and completing his quest; he will give the Killshot perk, which grants a 20% accuracy boost for head shots in VATS.

*Unlike the other Little Lamplight characters, there's no interaction possible with his inventory when trying to pickpocket him