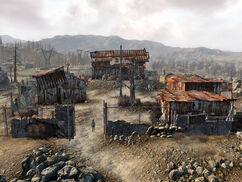 The Republic of Dave is the only true sovereign nation in the Wasteland. The only really civilized place left in the world.

The Republic of Dave is a small farming settlement in the far northeastern corner of the Capital Wasteland that is considered by its close-knit inhabitants to be a sovereign nation-state. In earlier years it was known as the Kingdom of Tom before being taken over by its current ruler, Dave, who subsequently allowed voting, and thus, it became a republic.

In his earlier days, Dave was exiled from the Kingdom of Tom and wandered the Wastes, gaining experience and maturing into a deadly mercenary. He returned, instigating a rebellion that eventually overthrew his father Tom, and renamed the Kingdom the "Republic of Dave".

Despite its small size, the Republic's economy seems to prosper due to increasingly rare trading with the caravans. It also has its own agricultural sector to the left of the entrance.

The Republic of Dave Military[]

The military consists of Dave and Bob.

The Lone Wanderer cannot become a citizen of the Republic, but to earn the right to stay temporarily, they can first tell Dave that they are looking for asylum. Or for "special asylum," the Lone Wanderer can become a "refugee" within the country; although, this incurs an "unwanted immigrant tax" (250 caps, or a hunting rifle in kind).

This office answers any questions an "Ambassador of the Wasteland" is likely to ask upon arriving.

Nothing is known about the bureau except that it is led by Dave.

When the Lone Wanderer finds this small fenced compound, Dave is 'president', but the player character can try to change this in the Election Day unmarked quest. The elections are a fairly important time in the Republic of Dave, though it does seem to be biased, as Dave is the only Presidential candidate. The people blindly believe that Dave is their rightful leader and will vote for him unless convinced otherwise with Speech.

The law of the Republic of Dave is also another crucial element; everyone should refer to Dave as "Mr. President" and treat him with the utmost respect, or else they will have twenty-four hours to leave the Republic or they will be executed.

The New Republic of Dave[]

If Dave loses the elections, he informs the Lone Wanderer that he is heading to Old Olney to make "The New Republic of Dave". For the new republic to establish, the player must go to Old Olney to clear out all the deathclaws in the area. Dave later arrives at the ruined city and sits in the area where the wastelander bodies are found. When spoken to, Dave informs the player that they are in the New Republic of Dave, and he orders that the Lone Wanderer is to leave at once. Speaking to him twice more makes him hostile towards you.

The Republic of Dave is a remote, single, albeit extended, family community located far to the northeast corner of the Capital Wasteland map. The compound is comprised of four primary buildings, an outhouse, and two Brahmin; their fenced-in area has only one recognized access gate. The buildings are wooden interior structures plated thickly with sheet metal. The perimeter is composed mostly of a tall chain link fence (similar to that of a power substation's fencing), with some sections built using wood and sheet metal.

Republic of Dave appears only in Fallout 3.

The lead designer is on record saying that the Republic of Dave was not inspired by anything in particular; it simply struck them as a funny idea for a location to visit. 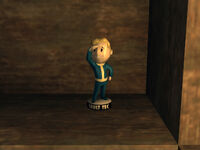 Dave's office safe with the Quantum