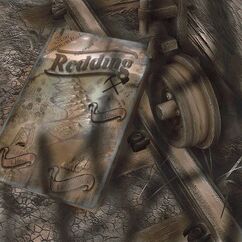 And you thought mutants were diseased.

Redding is a mining town in Fallout 2, located south-east of the Den. There are two major mining companies in Redding, as well as a saloon, a sheriff and a doctor. The mayor of Redding, Ascorti, runs an establishment called Ascorti's Ace casino. Redding mines gold for shipment to Vault City, New Reno, and the New California Republic, and the miners are some of the largest consumers of Reno's drugs.

The town is a collection of wooden buildings, and can be a wild and wooly place. The police force is small, relying on the sheriff's charisma to maintain peace and order; miners are a rough, hardened bunch that can cause a lot of trouble; while three powers of the wasteland seek to dominate Redding and bring it into their fold.

Like many other cities, Redding eventually joined the New California Republic. The gold in Redding, for a while, backed the NCR currency until it lost its value as a result of the NCR-Brotherhood War.

Redding has been repopulated for only a few years now, and it still has a Western-gold-town feel to it. Two major gold mines in town ship their ore to Vault City, New Reno, and the NCR. In a way, rough-and-ready Redding is the golden goose being squeezed - gently but firmly - between the three big cities that want the golden eggs all to their own.[1]

The busiest and most populated part of Redding; pick your poison: The Malamute Saloon offers whoring, drinks and a place to sleep (not recommended for light sleepers). Ascorti runs Ascorti's Ace and City Hall where you can gamble your hard-earned caps away. There is Law in Redding; out-of-towners and trouble-makers are kept in line by Sheriff Marion, who runs the city jail. If a night in the slammer isn't good enough for you, a visit to Painless Doc Johnson's should keep you in line.

The Great Wanamingo Mine is one of the gold mines in Redding. By 2241, it became inactive thanks to being infested with the alien-like wanamingos.

Numerous entrances to the mine exist, including one inside a ripped-open grave. Travel within the mine is extremely precarious, as the Wanamingos have extraordinary senses of perception and can detect intruders even through the walls of the mine, rushing in quickly to dispose of any interlopers. The Wanamingo mine has two levels, and is rumored to contain explosives as well as special electronic chips within the rusting hulks of the mining machinery.

The Morton brothers and their gang can be found here after accepting the quest Kill Frog Morton from sheriff Marion.

The Redding tunnels are a series of tunnels under Redding and are infested with rats and wanamingos. The tunnels are connected to the Great Wanamingo Mine and other locations, like the Malamute Saloon, Ascorti's Ace and City Hall etc.

Although Redding may appear unassuming it has great economic clout. Redding is northern California's primary producer and distributor of gold. Being the center of gold mining several larger political factions have volleyed for control of Redding to gain dominance in the gold trade. It is locked in the center of a power play between three major powerplayers: NCR, New Reno and Vault City. Sooner or later, the town will have to choose its allegiance, despite the fact that there's no perfectly good solution: proponents of New Reno claim it's the only way to keeping their autonomy, Vault City advocates claim it's the only city that can fully utilize Redding's potential and dismiss any worries that they might turn it into a slave labor camp while NCR sympathizers ignore the possibility that, in exchange for security and profits, Redding will be put under the NCR boot and turned into another splotch on its map.

By 2281, Redding has been annexed into the NCR. Several NCR soldiers stationed in the Mojave Wasteland claim to be from Redding[要出典], and one of Chief Hanlon's ending slides has him being elected as Redding's senator. However, Redding's importance to the Republic may be greatly reduced now that NCR dollars became a fiat currency instead of backed by gold, following the war with the Brotherhood of Steel. It also seems that the weight of the economy in Redding has changed from gold mining to brahmin trade, as many people are noted for owning a ranch there, most notably Hanlon and the Jamisons.

The primary political division in Redding exists over the growing drug issues and the future governance of Redding. The two large mining companies in Redding primarily dictate policy however they are divided by bitter hatred toward each other's policies. Marge LeBarge the owner of the Kokoweef Mine supports merging with the NCR. The Morningstar Mine run by "Dangerous" Dan McGrew is in favor of alliance with New Reno. The dispute often culminates in tensions and violence occasionally, usually down at the Malamute Saloon. In addition to the political division Redding is struggling to contain its drug problem and the law enforcement is taxed thin particularly after the sheriff had his leg accosted by a gecko. Further havoc is being sewn by a band of gangsters led by Frog Morton of the Morton Brothers. Mayor Ascorti is a questionable politician as well as appearing to be primarily a profiteer. His motives all seem to be generated by money as seen by his gambling hall and high rent demanded of impoverished elderly citizens.