I'm a synth. Synthetic man. All the parts, minus a few red blood cells.

Although Diamond City holds no small amount of hatred for the Institute and their synths, Nick gained their respect by saving the daughter of the city's former mayor when she ran away with a caravan trader. The caravan trader and his companions were, unbeknownst to the girl, actually kidnappers who (as kidnappers tend to do) proceeded to take her hostage. Nick stumbled upon the kidnappers purely by happenstance when he was wandering the Commonwealth wasteland, having been almost exclusively itinerant since his "awakening". Finding himself held at gunpoint and likely the girl's only hope, Nick scared the abductors away by claiming that he had a bomb inside him and beeping (true to Fallout-style humor, Nick claims that he literally just said the word "beep" repeatedly).

When the Mayor's daughter told Nick what had happened he returned her to her father, who in turn gave him a house in Diamond City as compensation despite the citizens' dismay and objections; Nick gradually assuaged the citizens' fears by acting as Diamond City's handyman. His formidable detective skills were brought to the forefront when he helped to find a wife who was thought dead: Nick discovered that she had in actuality run away with her lover. In time, people stopped asking Nick to fix things when it became clear that he had found his true calling as Diamond City's private investigator.

Once the Sole Survivor gains a sufficiently positive relationship with Nick, he will reveal that his personality and memories are those of a pre-war detective who volunteered to have his memories encoded into an early synth model by the Institute (which was at the time still known as the Commonwealth Institute of Technology). Upon awakening in his synth body many years later, Nick -- being possessed only of those memories and with no recollection of his construction nor of the Institute -- suffered tremendously from confusion and disorientation as he attempted to navigate the Commonwealth and to acclimate himself to his new reality.

It is revealed in Far Harbor that Nick is one of two unique synths the Institute manufactured to test if synths could handle independent thinking and judgement, with the other being DiMA-- the current leader of Acadia. DiMA and Nick were close while in the Institute, and eventually escaped together. However, once outside, Nick--still disoriented from being experimented on--panicked and attacked DiMA. Having no other choice, DiMA knocks him unconscious and abandons him for unknown reasons. The two are reunited when Nick and the Sole Survivor travel to Far Harbor on a case, and though DiMA is very glad to see his brother again, Nick is reluctant due to not remembering DiMA at all. Upon finding proof of their relationship, the Sole Survivor can convince Nick to accept DiMA as his brother, and the two will occasionally greet each other or chat upon entering Acadia.

As synths and their associated technology were largely unknown at the time Nick escaped the Institute, most wastelanders regarded Nick with equal parts fear and awe; however, he was eventually accepted into a small local community where a mechanic offered to repair the damage he had sustained in his travels. During this time Nick befriended a child he knew only as "Jim" the first human contact Nick ever had. Nick eventually left that settlement; upon visiting years later, he found that it had been pillaged by raiders. The fate of its population remains unclear.

During the quest Long Time Coming Nick reveals that an old criminal from before the war, Edward Winter, killed his fiancé Jennifer Lands. After killing Eddie, Nick will lead to a spot nearby which he then explains is the spot where Jennifer was murdered.

Nick Valentine appears only in Fallout 4.

Inside the Memory Den
Nickv1.jpg
Outside
Nickvinside.jpg
Inside the Valentine Detective Agency 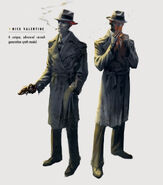