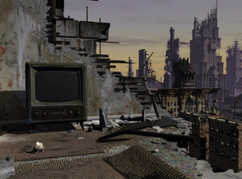 Necropolis, also known as the City of the Dead, is a ghoul city upon the remains of Bakersfield, located in southern California.

This Greek word meaning "city of the dead" refers to this strangely silent ghost town. Most of the buildings are intact, but travelers report that no one seems to live there, and people who arrive to settle it either end up with radiation sickness or simply disappear. The truth of the matter involves a small population of ghouls beneath the city's streets.

Necropolis is east of the Hub, about halfway between it and Hoover Dam. Merchants usually avoid Necropolis altogether, or plan their trips so that they pass it during the daylight hours, as it has a bad reputation. The ghouls are intensely afraid of outsiders, and prefer guerrilla tactics to keep their city safe. There are unsubstantiated rumors that the Master and his minions wiped out the ghoul population, but caravans traveling through the area still avoid Necropolis and tell stories of ghost-like humans in tattered clothes.

On October 23, 2077, the United States was destroyed as the country was bathed in atomic fire. Those with the money and luck fled into great underground Vaults, fallout shelters which were advertised as protection, but were in fact part of a sinister experiment funded by Vault-Tec and the US government.

Vault 12 in Bakersfield was one such Vault. When the bombs dropped, air raid sirens sounded, and the Vaults sealed shut, not to open for decades or in some cases even centuries. But the inhabitants of Bakersfield were not to know that Vault 12 had an intentional design flaw - the door would never shut properly. Once it became clear that the other vaults had sealed, people within Bakersfield attempted to force their way into Vault 12 to protect themselves and their families.

Despite the obvious problems, those sheltered in Vault 12 were protected from the brunt of the blasts. It was not until radiation seeped in from toxic clouds of radioactive waste when problems arose. People's skin began to dry and flake, hair began to fall out - the first ghouls had been created (excluding Desmond Lockheart).

In the summer of 2083, the city of Necropolis was founded by the Vault 12 dwellers, as well as any locals who had survived the bombs. In the spring of the following year, Set wrested control from the original Vault 12 Overseer, establishing a status quo which would remain for nearly 80 years. The Vault 12 Overseer, not willing to take a dirtnap, was driven north, where history lost sight of him.

In 2157, the Master learned the location of the Bakersfield Vault, and in order to further his plans (which required him to find humans untainted by radiation), he sent a detachment of super mutants there to seize the Vault. Many ghouls were snapped like twigs in the attack, until Set finally parleyed with the super mutants, telling them that the ghouls are the Vault dwellers the super mutants are looking for. The super mutants, angered at failing to find an intact Vault, set up a small garrison at the watershed to watch the inhabitants and ensure Set's cooperation in the war to come.

In February of 2162, the Vault Dweller recovered the water chip in Necropolis, but Ian was killed by a super mutant and reduced to a cinder during the fight. In March of the same year, the mutant army attacked Necropolis, sparing none of the ghoulish inhabitants that did not flee. After the mutant armies advanced, they left a truly dead city behind them. Necropolis, however, didn't become completely empty as a few ghouls still lived there. [1]

The scattered survivors of Necropolis led the Great Migration across the wastes, leading to the founding of towns such as Gecko, Dayglow and Broken Hills.

主要記事: Hall of the Dead

In a building that appears to be the remains of some sort of church, you can find a number of imprisoned glowing ones, Set, Garret, and various ghoul guards.

The Vault Dweller could have saved Necropolis from their slaughter by killing the Master before the Lieutenant, and doing so before 25 March 2162 (after 110 days have passed). To get the good ending, the player should never return to the city after the date passed.

Necropolis appears only in Fallout and is mentioned by multiple characters in Fallout 2 and by Raul in Fallout: New Vegas (as Bakersfield).