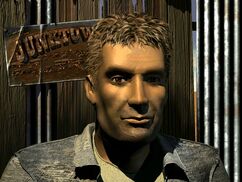 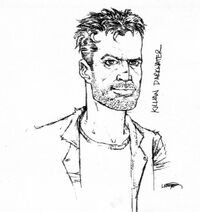 Aside from being mayor, Killian is also head of the local guard force, and a thorn in the side of Gizmo, who would like to see Killian eliminated. He is tough and strong, a decent man who hates bullies. Though not a violent man, he will fight to the death to protect himself and his town. Knowing that Gizmo is trying to kill him, he always keeps two guards outside the door to his store.[1]

Killian is the grandson of Junktown's founder, an American soldier who found himself without an allegiance after the nuclear holocaust devastated the planet.[2] He is a tough but fair leader, aiming to make Junktown a safe and prosperous town for its citizens. He values law and order above all else, putting him at odds with the less reputable elements of the town's society, especially Gizmo, who resents Killian for "cramping" his business. Killian took over Junktown when his father died[3].

Killian Darkwater appears in Fallout and is mentioned in Fallout Bible.

"Well that's a damn fine coincidence! That's what this store's here for! We got about everything you can need."

"Oh yeah, sure you do. And when you were a baby, your crib was a safe."
"Why don't you come back when your mama teaches you some manners." 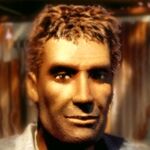