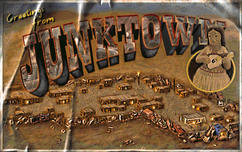 My father used to tell me stories about the War. His father was a soldier before starting Junktown.

Junktown is one of the smaller towns in southern California. It was founded shortly after the War by a soldier named Darkwater.[1] Instead of building on the ruins of an old town, he thought it would be better to begin from the ground up. As the name suggests, it was built after the Great War out of random pieces of junk, mostly from wrecked cars. The town mostly lives off of trading and has a reputation for open hospitality.

In 2161, the mayor of Junktown was Killian Darkwater, grandson of the town's founder, who also ran Darkwaters General Store. Another big player in the town was Gizmo, a big-time crook and casino owner. While Gizmo's Casino brought a lot of tourists and money into the town, problems also came with it. Other important places in Junktown at that time included the Crash House, home to the Skulz and the Skum Pitt, a bar owned by Neal. Doc Morbid was the town's doctor. Tycho, a Desert Ranger, also resided in Junktown for a while at that time.

Drawing weapons in town is not permitted except in self-defense. The gates to the town are closed at night. Lars headed the guards in Junktown, working for Killian Darkwater. The gates were guarded by Kalnor. They also had a jail, which was guarded by Andrew. The guards were aware of the illegal activities of Gizmo and the Skulz, but did not want to act without proper evidence. Gizmo hired a man to assassinate Killian, in order to gain full control over the town. It is not explicitly stated in Vault Dweller's memoirs which side the Vault Dweller sided with, as it alludes to both Killian and Gizmo.

After 2186, Junktown became part of the New California Republic as part of the state of Shady and it was one of the first provisional states, considering it was one of the first (and most trustworthy) of the Shady Sands trading partners during its early formation. Its alliance with the NCR did cause some alarm from the caravans in the Hub at first, but the Hub eventually became part of NCR as well.[2] Currently, it is still part of the state Shady.

This is the underground laboratory where Doc Morbid is busy with underground activity. His assistant Gretch can shoot you for free too.

Junktown appears only in Fallout. There is a reference to Junktown in Fallout 3, Fallout: New Vegas, and Fallout 4 under a Barter skillbook named Tales of a Junktown Jerky Vendor. It is also mentioned by Frank Weathers in New Vegas.

The initial design for Junktown called for the ending cards of the city to be reversed. Specifically, if the Vault Dweller sided with Killian Darkwater, then Killian's firm "frontier justice" would discourage traders and merchants from starting businesses in the area, leaving the city a small shanty town. If the Dweller sided with Gizmo, then the resulting prosperity brought in by Gizmo's casino led to the city becoming a new boom town. Ultimately, it was decided that this mixed message was unsatisfying because it meant that the expected results (a "good" ending for supporting Killian and the law, versus an "evil" ending for supporting Gizmo and his criminal enterprises) did not match the player's actions. The ending was subsequently changed so that supporting Killian led the town to prosper with law and order, while supporting Gizmo turned the town into a seedy den of iniquity.[3]

Junktown is a fictional town, not based on a real place.[4] Based on the in-game map, it appears to be located west of the present-day city of Ridgecrest, California.