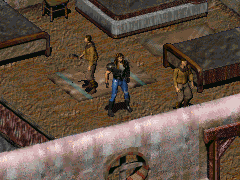 According to the Vault Dweller's memoirs, part of Fallout 2, Ian died while fighting super mutants in Necropolis with the Vault Dweller, having been burned to death by a flamer. However, in the special encounter "Café of Broken Dreams", Tandi mentions that Ian may be a part of the Abbey.

At one point in the planning for Fallout 2, Ian had survived and was living in Vault City under the name of Old Joe. According to his dialogue, Ian would mistake the Chosen One for the Vault Dweller and would reminisce about events from Fallout before realizing the mistaken identity. Commenting on the prejudiced nature of Vault City's citizens, he would give the Chosen One a gun, apparently his old Colt 6520 10mm pistol before sending them away, encouraging the Chosen One to "make proud" the memory of the Vault Dweller.