And so, for a generation since its founding, Arroyo has lived in peace, its canyons sheltering it from the outside world. It is home. Your home. But the scars left by the war have not yet healed. And the Earth has not forgotten.

Fallout 2's gameplay is similar to the original Fallout. It is a role-playing game with turn-based combat, where the player plays the game in the pseudo-isometric view.

Fallout 2 uses a character creation system called SPECIAL. S.P.E.C.I.A.L is an acronym and initialism of Strength, Perception, Endurance, Charisma, Intelligence, Agility, and Luck. These are the seven basic attributes of every character in the game. They are used to determine the skills and perks of the given character.

There are 18 different skills in the game. They are ranked from 0% to 300%. The starting values for those skills at level one are determined by the character's seven basic attributes, but most of those skills would fall between 0% and 50%. Every time a level is gained, the player will be awarded skill points to be used to improve their character's skills, equal to five points plus twice their Intelligence. The player may choose to "tag" three of the 18 skills (though later a fourth skill may be tagged). A tagged skill will improve at twice the normal rate. Some non-player characters can also improve Skills via training.

Active skills may be selected and used on the player, non-player characters, and the environment to accomplish tasks. For example, a player may use First Aid to heal themselves or allies, or use Repair to fix a generator. Active skills can also contribute to in-game dialogue. For example, someone with a high Science skill could talk to a scientist and get a better response out of them than if they had a low science skill.

Passive skills also contribute to in-game dialogue, along with various other things throughout the game. However, they can't ever be selected and used like active skills can.

Books found throughout the game world can improve Small Guns, First Aid, Science, Repair, and Outdoorsman skills, up to a maximum of 91% skill value; using a skill book after that will do nothing to raise the skill any further. Books are scarce early in the game, and the max cap can make books less useful later on. Vault City and San Francisco are good sources of books.

Lockpicks can make it easier to open locks; note however that not all doors have the code script required for all lockpick types, and the bonus may vary. Normally +20-40%, it can range from +10-50%. Some skills can also be improved while having certain items equipped. (E.g. equipping a lock picks would improve lockpicking skills.) Stimulants can also temporarily boost player's skills; however, they often have adverse effects such as addiction and withdrawal. As Skills grow higher in rating, they begin to cost more Skill Points to increase.

At character creation, the player may choose two optional traits. Traits are special character attributes, such as 'Skilled' (which drastically increases the player's skills, but adds an extra level before the player may choose each perk), or 'Jinxed' (enemies have a greater chance of critical attack failures, but so does the player). A Trait normally contains one beneficial effect and one detrimental effect, and are listed below the Perks section in the character sheet. Once a Trait is chosen, it is impossible to change, except by using the "Mutate" Perk which allows the player to change one Trait, but only once.

"Perks" are special elements of the leveling system. Every three levels (or every four if the player chose the "Skilled" Trait), the player is granted a perk of their choosing. Perks grant special effects, most of which are not obtainable via normal play in the game, such as letting the player take more actions per round. Unlike traits, most perks are purely beneficial—they are usually offset only by the infrequency of acquiring them.

Fallout 2 features a much wider array of items, weapons, and armor than Fallout. Most of the items from Fallout returned, but had alternate and upgraded forms: the minigun, for example, is now joined by the Avenger and Vindicator miniguns. Item prices were also increased at stores, making scavenging for items more important. In addition to old, upgraded weapons, several new weapons were introduced for all branches of combat, thus making no combat skill the best, and allowing the player to be powerful with any weapon. The range of enemies was also increased to a wider diversity. The end result is a much more complex combat environment.

Skills start off at a lower rate than the first game, and the various skills are also more important. Previously, skills like Unarmed, Doctor, and Traps were used sparingly, but now, all skills are useful to a degree. The maximum level of a skill was increased from 200% to 300%. Another notable change is that a skill, after reaching 100%, requires more than one skill point to increase, up to six skill points per 1% (2% if the skill is tagged) increase after 200%. The Unarmed skill in particular was made much more sophisticated by adding different types of Punches and Kicks depending on the player's Attributes and skill level. Several new Perks were added while most others were retained, allowing a greater degree of customization. The Friendly Foe perk in Fallout is now a default feature in Fallout 2.

Karma is accompanied by Reputation, and while Karma affects the player as a whole, Reputation affects how the player is received in a single town. While Karma is achieved by doing good things and killing villainous characters, Reputation grows based on how the player helps the city, usually by completing sub quests. By nature, Reputation and Karma tend to grow parallel to each other. As in Fallout, good and evil characters react differently to players with different Karma. Also, the player can acquire certain titles (Gigolo, Made Man, Slaver) based on their actions that also affect the game and how others react to them.

In the original Fallout, subquests in the towns and cities were usually solved within that city, with only a few subquests requiring the player to travel. The cities, fairly isolated except for caravans, were concerned with their own problems. In Fallout 2, however, the cities have a great deal of contact with each other, and with the sole exception of Klamath, actions in one city will affect the state of another, and subquests will often require the player to go back and forth from location to location to kill enemies and deliver messages and items.

The game's overall subject matter was generally more mature, with drugs and prostitution becoming major elements of the setting. The use of strong language remains uncensored, with an optional dialogue filter. During the course of the game, players can join the Mafia, become a porn star, get married and subsequently divorced, and prostitution is a strong recurring theme. Slavery also becomes an important subplot, and players can either side with the Slavers or join their opponents (such as New California Rangers) who try to stamp slavery out. Non-player characters can be bought and sold as slaves during the course of the game.

Speedrunning is much more difficult than in Fallout. In Fallout, players could go straight to the Military Base, destroy it, then travel to the Cathedral and do the same. In Fallout 2, the final areas cannot be accessed until a computer part from Vault 13 is found, and Vault 13 in turn cannot be found until one of two quests have been completed, thus requiring a great deal of fighting that requires a higher-level character to survive. (Note: It is possible to bypass Vault 13 and the computer part quest with a 'Stupid' character by using chems to lower Intelligence temporarily). Also, while the player can recruit allies for the final encounter, there is no way to completely avoid the final boss battle in Fallout 2 -- again, encouraging combat and making a speedrun difficult. In spite of these factors, the game was completed in 17:51 on a video posted on the Speed Demos Archive website.

In the time since the Vault Dweller's exile, a new government known as the New California Republic (abbreviated NCR) has begun to unify the southern towns and is spreading to the north. A mysterious new organization known as the Enclave has emerged with the most sophisticated technology in the wastes, even surpassing the Brotherhood of Steel. A new drug, jet, has become a cancer on many towns, its addictive properties forcing many to rely on the town of New Reno to keep them supplied.

During 2241, the humble village of Arroyo suffered the worst drought on record. Faced with this hardship, the village elder asked the direct descendant of the Vault Dweller, referred to as the Chosen One, to perform the quest of retrieving a Garden of Eden Creation Kit (G.E.C.K) for Arroyo. The GECK is a device that can create thriving communities out of the post-apocalyptic wasteland.

The player, assuming the role of the Chosen One, is given nothing more than the Vault Dweller's jumpsuit, a RobCo Pip-Boy 2000 handheld device, a Vault 13 water flask, and some cash to start this quest.

The player eventually finds Vault 13 (the first place possible to obtain a GECK) devoid of the majority of its former human inhabitants. The Chosen One returns to find his village captured by the Enclave, a mysterious group which is later revealed to be the remnants of the pre-War United States federal government. The player, through a variety of means, activates an ancient oil tanker and its autopilot, thus allowing him to reach the Enclave's main base on an offshore oil rig.

It is revealed that the dwellers of Vault 13 were captured as well, to be used as test subjects for FEV (Forced Evolutionary Virus), alongside Arroyo tribesmen and women. Vault 13 was supposed to be closed for 200 years as part of a Vault-Tec Vault experiment; this makes them perfect test subjects. The Enclave modified the Forced Evolutionary Virus into an airborne disease, designed to attack any living creatures with mutated DNA. With all genetic impurities removed, the Enclave (who remain protected from radiation) could take over.

The Chosen One frees both his village (Arroyo) and the Vault 13 dwellers from Enclave control, and destroys the Enclave's oil rig. In the ending, the inhabitants of Vault 13 and Arroyo create a new prosperous community with the help of the GECK together.

The fact that in Fallout, Fallout 2 and Fallout 3 the player characters are raised in an isolated community works with the plot structure, allowing the character to be as ignorant about the game world as the player would be and explaining why the map the character starts with is almost completely unexplored.

The game soundtrack for Fallout 2 was composed by Mark Morgan, who also created the soundtrack of the first Fallout.

[Graphics]
;Set to 0 for 8 bit fullscreen
;Set to 4 for dx9 fullscreen
;Set to 5 for dx9 windowed
;A dx9 mode is required for any graphics related script extender functions to work (i.e. fullscreen shaders)
;Modes 1, 2 and 3 are no longer supported
Mode=4 または 5


[Misc]
;Set a number of milliseconds to idle each input loop
;Set to -1 to disable
;Set to 0 to idle only if other processes are waiting for processor time
;Set to 1 (or some higher number if needed) to prevent 100% cpu use
ProcessorIdle=-1 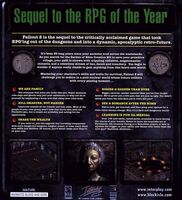 The back of the US box art 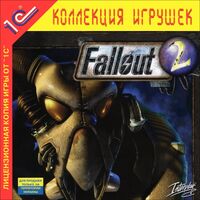 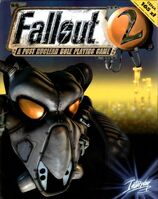 Early version of the Fallout 2 logo used in promotional materials