Van Buren was the project name Black Isle Studios assigned to their version of Fallout 3.

The game was going to use an engine that Black Isle had made for Baldur's Gate 3, commonly referred to as the Jefferson Engine. It was a fully 3D engine, but was never used.

Black Isle Studios planned to include a dual-combat system in the game that allowed for the player to choose real-time (like Fallout 3 or Fallout Tactics) or turn-based combat (like Fallout 1 & 2), but real-time was only included due to Interplay's demands.[1] Nonetheless, Joshua Sawyer had stated that the emphasis would be on the turn-based version. Co-operative multiplayer was also going to be included in the game, again because of publisher requirements.[1]

In 2003, the game was canceled due to financial difficulties. 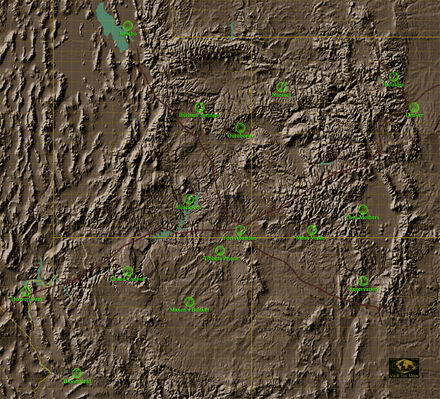 Van Buren would have taken place in the American southwest (Arizona, Nevada, Colorado, Utah). The westernmost sites on the game map are the easternmost borders of New California Republic. According to the design documents, it was to be set in the year 2253.

Some places that appeared in Van Buren:

Places cut from the final version of the game:

The game would have begun with the player character in a prison cell. Because of this, the player was given a choice. The prisoner could be an innocent that was imprisoned because of some misunderstanding, or they could choose to be a criminal and take bonus traits that would bolster some of their skills.

The player would awaken in a prison cell, but not the one they remembered falling asleep in. Suddenly, the floor rocks violently from an explosion and the player is knocked unconscious. When they awaken, they find their cell door open and a hole in the wall leading outside. Leaving the prison, the character is under attack by some unknown assailant. Deciding that discretion is the better part of valor, the player flees into the night to explore this new world.

Unfortunately, this newfound freedom may be short lived. The player is relentlessly pursued by robots who want to return them to the prison. As they explore the world and try to outwit their pursuers, they begin to uncover an underlying plot. Why was the character in a different prison than the one they fell asleep in? Why can't they remember being transferred? What was the attack on the prison about in the first place? Then they find out about NCR's problems, and a few things don't add up....

Just like all the titles in the Fallout series, the story ends with multiple different endings for every community and faction that you interacted with. Their outcome depends on your actions.

Eventually, the player would discover the true reason behind the prison and the attack on it. It turns out that, through extensive research, the mad scientist called Presper, disgusted with what the world turned into after the War, discovered the history of New Plague, the virus that FEV was initially created to cure, and its genocidal potency, and also discovered a viable means to cleanse the world. Using ODYSSEUS, the quarantine prison, and a ballistic satellite known as B.O.M.B.-001, the way to human planetary domination and order became clear. He needed to get to B.O.M.B.-001 and use the nuclear weapons to clean the filth and wretch that currently have occupied the surface.

Presper and his followers released the New Plague virus in the remote areas near Boulder and Denver. It was close enough to the quarantine prison to spur ODYSSEUS into action, but not near enough to cause huge populations to start a general panic. Once enough people were infected and ODYSSEUS "arrested" enough people to just about fill up the prison, Presper’s men would stage an attack on the prison which would allow everyone to escape. This event would start a countdown of sorts for missile launch on B.O.M.B.-001. ODYSSEUS would assess the viral spread, try to gather up the escaped prisoners, and, once 90% of the prisoners had been retrieved, launch nuclear missiles to “clean & prevent” any further infection. By the time this happened, Presper had planned to be on, and in full control of, B.O.M.B.-001 and reprogramming targeting solutions to clean the areas he wanted. Humans of his choosing would wait out the second nuclear holocaust in the Boulder Dome, until the day came where he declared the Earth safe for pure blood humans once more.

A tech demo of Van Buren was created during the game's development. When asked about it, Bethesda's Pete Hines replied: "(...) releasing someone else's unfinished product, or assets from it, is not something we intend to do." Several screenshots and one video of the tech demo were released at No Mutants Allowed on April 30, 2007, followed by the tech demo itself on May 2.

The plot of the tech demo is not connected to the main storyline and was going to be included in the finished game as a tutorial. It takes place in the United States of America during the Great War, somewhere in the Great Midwest Commonwealth or the Pacific Time Zone[2]. The player character in the demo is referred to only as Citizen (even though the Citizen uses the Prisoner's model). The Citizen's parents were reduced to ash, as they didn't believe the government's bombing raid sirens. The Citizen made his way to the relocation center and was escorted to a Vault by Corporal Armstrong of the 4th or 13th Armored Infantry Division. To reach the Vault, they must fight communist insurgents. After they enter the Vault, the Citizen must help turn on the life support system.

The game used a highly modified version of SPECIAL, the character system used in previous Fallout games. The changes were introduced mostly by J.E. Sawyer. Some of his changes were accepted well in the Fallout community, while some, such as merging combat skills and dividing Speech into Deception and Persuasion, were quite controversial.

Van Buren was at some point planned to have three playable races, including humans, ghouls and super mutants.[3]

In an IGN article, Obsidian's CEO reveals the Fallout 3 that was never released — IGN Unfiltered[7], Van Buren was Black Isle Studios' second attempt at Fallout 3. The original attempt was created using the NDL 3D technology (later acquired by Gamebryo and used to power Fallout 3). Due to financal issues at Interplay, the studio redirected their efforts on the project to produce the dungeon-crawling RPG Icewind Dale.

Van Buren map loader
Add an image to this gallery

A short video demonstrating the Van Buren tech demo created by Black Isle in 2003. Presented by No Mutants Allowed.

Retrieved from "https://fallout.fandom.com/wiki/Van_Buren?oldid=3240009"
Community content is available under CC-BY-SA unless otherwise noted.