Two separate buildings support the ship on their roofs depending on the quest's status.

One large colonial-era wooden frigate with several interior cells, as well as a large top deck.

The USS Constitution is a three-masted, forty-four gunned frigate that was built at the Charlestown Navy Yard in North Boston in 1797, specifically designed to be larger and more heavily armed than standard frigates of the period. The ship triumphed in sea battles against pirates in the First Barbary War and against the British in the War of 1812. She had eventually earned the nickname "Old Ironsides" for the resilience of her oak hull in combat.

The ship was finally dry-docked and restored in the 1920s, and remained the crown jewel of her eponymous maritime museum in the Boston Naval Shipyard until its destruction in 2077. Sometime between 2077 and 2287, somebody fitted NX-42 rocket engines to both sides of the ship, ran wiring and electronic equipment throughout the ship and installed a radar dish on the main deck. The ship then attempted to take off, but ended up landing on top of the Weatherby Savings & Loan bank, just north of Boston.

The player can board the ship by either: going to the second floor of the building the ship rests on, and then entering an access door in the hull of the ship, or by using the lift at the stern (back) to access the top-deck directly. The inside of the ship consists of three decks filled with supplies and items along with several turrets, protectrons and some Mister Handies located throughout.

The USS Constitution is seen to have been outfitted with four NX-42 rocket engines that look similar to the Rocketdyne F-1 rocket engine without the nozzle extension, two at the stern and one on each side of the bow.

The USS Constitution appears only in Fallout 4. 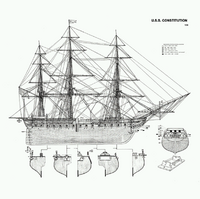 Schematics from the game files